At Kerafast, it’s become an annual tradition at the start of each year to look back at how the reagents in our catalog have helped contribute to scientific progress. Our company mission is to facilitate access to the unique reagents developed by academic laboratories. Together with our providing investigators, we get lab-made reagents out of freezers and into the hands of scientists worldwide, with the goal of accelerating life science research. Here, we look at how 10 of our available reagents were used in 2018 to further understanding of science and disease: 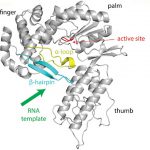 From the laboratory of Anna Marie Pyle, PhD, Yale University

From the laboratory of Stephen H. Leppla, PhD, National Institute of Allergy and Infectious Diseases/NIH

Our DNA-RNA hybrid antibody continued to be used by researchers around the world, due to its high specificity and affinity for DNA-RNA hybrids and ability to detect R loops. In 2018 alone, we shipped the antibody to scientists on five different continents and saw it cited in peer-reviewed publications including Nature Communications, Nucleic Acids Research and Scientific Reports. Also this year, we worked with our sister company Absolute Antibody to develop four new recombinant engineered versions of this antibody clone; view them here.

The MC-38 cell line, derived from murine colon adenocarcinoma cells, was used for a variety of research applications in 2018. For example, it was cited in a Developmental Cell paper exploring how macrophages promote melanoma metastasis, and Nature Medicine study that identified a new immunotherapy target for treating colorectal cancer. The MC-38 cell line has also been engineered to express either MUC-1 or carcinoembryonic antigen (CEA).

From the laboratory of Stacia A. Sower, PhD, University of New Hampshire

Dr. Sower retired in 2018, and to ensure her reagents continued to live on after the closing of her lab, she added them to the Kerafast catalog. Upon Dr. Sower’s retirement, the General and Comparative Endocrinology journal published a special issue honoring her research legacy; check out the issue here, or a University of New Hampshire news article about it here. Other researchers can now easily access Dr. Sower’s GnRH antibody and synthetic peptides, and we’ll be adding more of her reagents to the online catalog this year. 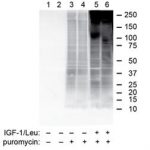 The Puromycin Antibody from Penn State College of Medicine.

From the laboratory of Scot R. Kimball, PhD, Penn State College of Medicine

From the laboratory of Martin Olivier, PhD, McGill University

Dr. Olivier made his bone marrow derived macrophage cell lines available via the Kerafast catalog in February 2018. By the summer, the cell lines were already cited in a Nature Communications article exploring how immune cells protect against Legionnaires’ disease and other lung infections. Learn more about that research here.

From the laboratory of Thomas U. Schwartz, PhD, Massachusetts Institute of Technology 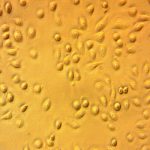 This cell line demonstrates near normal genotype and phenotype of human pancreatic duct epithelial (HPDE) cells, making it an attractive model for pancreatic carcinogenesis studies. This year, it continued to be used to further our understanding of pancreatic cancer and potential treatments; for example, it was cited in an article on personalized RNA medicine for pancreatic cancer, as well as a study on targeted drug delivery into pancreatic cancer.

From a laboratory at Cancer Research Technology

MultiDsk is a novel ubiquitin-binding protein reagent that enables efficient capture of ubiquitinated proteins from cell extracts. It can also be used to inhibit de-ubiquitination. We were excited to see the reagent used in a June 2018 Cell Reports article providing new insight into DNA repair regulation; you can learn more about that research here.

From the laboratory of Douglas S. Lyles, PhD, Wake Forest School of Medicine

VSV is a widely used model system for studying viral replication and assembly, and the Lyles lab has made available various monoclonal antibodies that react with different epitopes in VSV’s G, M and N proteins. In 2018 alone, these antibodies were accessed and used by researchers across four different continents, with our team shipping to countries such as Japan, Germany, Australia, Canada and Israel. The procuring researchers were busy: we saw citations in publications including Nature Communications, Scientific Reports and Journal of General Virology.

If you used any of our reagents to advance your research in 2018, be sure to let us know! Email info@kerafast.com with your peer-reviewed article citing a Kerafast reagent, and we’ll provide a one-time 50% off coupon code for your next reagent purchase. Best wishes for successful research in 2019!