A better understanding of methane-digesting bacteria

A recent study has revealed new information about the inner workings of methanotrophs, bacteria that metabolize methane for their source of energy. This process requires copper, and Northwestern University researchers have pinpointed two new proteins that help methanotrophic bacteria acquire copper from their surrounding environment.

These findings have a variety of potential applications, both medical and environmental. The paper was published in Science and cites our LOBSTR E. coli Expression Strain, which was developed by the Thomas U. Schwartz lab at MIT for the one-step downstream polyhistidine-tag affinity purification of poorly expressing proteins.

Methane in our environment

Methane (CH4), the primary component of natural gas, is a significant driver of greenhouse gas buildup. Though methane’s atmospheric lifetime is much shorter than that of carbon dioxide, methane traps more radiation. According to the US Environmental Protection Agency, pound for pound, the impact of methane is more than 25 times greater than carbon dioxide over a 100-year period.

More than 60% of total methane emissions come from human activities, including energy production, agriculture and waste management. In particular, methane is released into the atmosphere during the production and distribution of natural gas and oil. With methane’s effect on climate change, researchers have been working to develop ways to remove the compound from our environment. 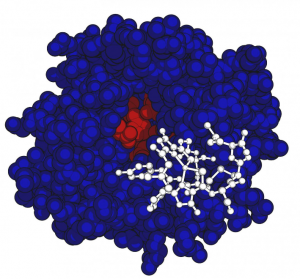 In the new Science study, the research team looked at methanotrophs, bacteria that utilize copper to oxidize methane for carbon and energy. To obtain the necessary copper, methanotrophs secrete a peptide called methanobactin, which tightly binds copper ions to bring them into the cell. However, until now, scientists did not know much about the mechanisms behind methanobactin production.

The Northwestern University researchers identified two previously unstudied proteins – MbnB and MbnC – that play a role in the creation of methanobactin, adding the copper-binding groups to a precursor peptide. Homologs of these proteins are found in other bacteria as well, including human pathogens, suggesting they may have roles beyond methanobactin synthesis.

Researchers are excited about the potential applications of methanotrophs, and this deeper understanding of how they digest methane could help realize their promise. First of all, filters with methanotrophs could be used to absorb methane from the atmosphere or natural gas reserves. This would help reduce the level of greenhouse gasses contributing to global warming.

From a basic research perspective, the new paper makes future studies of methanobactin easier, since scientists can isolate the two key proteins rather than manipulating entire living bacteria. Therapeutic applications are also possible, in particular for treating Wilson disease, a rare genetic disorder that prevents the body from removing excess copper. Because methanobactin binds copper so tightly, it might be used in a drug to eliminate copper from patients. Finally, other researchers are exploring whether methanobactin could be used to create new antibiotics.

“Now that we know which microbial genes and proteins to look for, and now that we know what some of the key proteins do, we can effectively predict which species will make new and different methanobactins,” senior author Amy C. Rosenzweig said in a press release. “And we can test those compounds for bioactivities.”

If you work in this area of research, the LOBSTR E. coli expression strain used in the study can be found here. You might also be interested in our wide selection of bacteriology reagents, developed and made available by academic labs worldwide.