A new study has identified an enzyme that regulates DNA repair through deubiquitylation of a key protein. The research, led by University of Sheffield scientists, has implications for better understanding chemotherapy-resistant cancers as well as neurological disorders.

The human genome can undergo thousands of breaks every day, with DNA damage resulting from environmental factors such as ultraviolet rays and chemicals. To counteract these breaks, the body is equipped with many DNA repair proteins, responsible for detecting and fixing the damage.

The new study looked specifically at a protein involved in chromosomal break repair, tyrosyl DNA phosphodiesterase 1 (TDP1). Variations in TDP1 expression levels have been linked to different clinical problems, including cancer and neurological diseases. However, the mechanism behind its under or overexpression has been unknown. 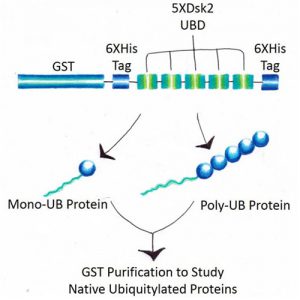 Diagram showing the functionality of the MultiDsk Ubiquitin Binding Protein Reagent, used in the new study and available to researchers worldwide here.

The University of Sheffield researchers discovered that an enzyme called UCHL3 regulates TDP1. UCHL3 is a deubiquitinating enzyme, meaning it removes ubiquitin from target proteins. Ubiquitin is a highly conserved regulatory protein, found in eukaryotes from yeast to mammals, and its presence on a protein can cause a range of effects, including degradation.

UCHL3 controls TDP1 by removing its ubiquitin. An overexpression of UCHL3 causes less ubiquitination, therefore increasing TDP1 protein levels. This pathway is linked to chemotherapy-resistant cancers such as rhabdosarcoma. In contrast, an under-expression of UCHL3 results in more ubiquitination of TDP1, reducing TDP1 protein levels. This lack of TDP1 is found in neurological diseases such as ataxias, in which people lose control of their body movements.

Therefore, having the right amount of UCHL3 is critical to maintaining the correct balance of DNA repair within the body. As senior author Dr. Sherif El-Khamisy said in a press release, “This study identifies UCHL3 as a novel therapeutically druggable target where suppression of its activity can improve cancer treatment, whereas encouraging and fueling its activity can combat neurodegeneration.”

The ubiquitin binding protein reagent used in the study can be found here. You also might be interested in our DNA Damage/Repair Transformed MEF Cell Lines from the National Institute of Environmental Health Sciences/NIH, as well as other available materials for studying ubiquitin, including: