Protection against Legionnaires’ disease and other lung infections

An international team of researchers has shown that MAIT cells, recently discovered immune cells whose exact function remains unclear, play a role in protecting against two strains of Legionella bacteria, which cause the lung infection Legionnaire’s disease.

The results, published in Nature Communications, offer a potential new approach for protecting people against lung infections. We were excited to see our Bone Marrow Derived Macrophage (BMDM) Cell Lines, made available by the Dr. Martin Olivier laboratory at McGill University, used in the study.

Mucosal-associated invariant T (MAIT) cells are evolutionary conserved white blood cells found in humans and many other mammals, with the potential to recognize a wide variety of microbial pathogens. Located in high numbers in blood and lung tissue, MAIT cells are believed to play a key role in the immune system’s respiratory defense.

However, MAIT cells had not yet been shown to protect against any major human pathogens. In the new study, led by researchers from the University of Melbourne, the team explored MAIT cells’ role in Legionnaire’s disease. 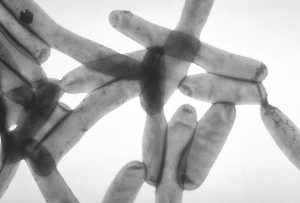 Legionnaire’s disease is a severe form of pneumonia with a 10% mortality rate. According to the CDC, about 6,100 cases of the disease were reported in the United States in 2016, though it is believed that the disease is underdiagnosed and the number affected is likely higher.

The disease was first discovered in 1976, when an outbreak of lung infections occurred at an American Legion convention in Philadelphia. Upon investigation, a new Legionella bacterium, present in the convention hotel’s air-conditioning system, was found to be responsible for the outbreak.

People get Legionnaire’s disease from inhaling mist containing the bacteria; it is not typically spread from person to person. There are currently no vaccinations to prevent the disease.

In the new study, the researchers looked at MAIT cells in both mouse (in vivo) and human (in vitro) models of lung infection. Legionella bacteria was found to induce MAIT cell accumulation and activation, and MAIT cell presence was connected to improved survival rates. The team also showed that protection against Legionella bacteria could be enhanced with MAIT cell-activating vitamin metabolites.

The researchers hope these results could help in the development of therapies that protect against Legionnaire’s disease and other lung infections. As they wrote in their paper, “Our findings define a function for MAIT cells in protection against a major human pathogen and indicate a potential role for vaccination to enhance MAIT cell immunity.”

The Bone Marrow Derived Macrophage (BMDM) Cell Lines used in the study are available to scientists worldwide here. If you work in this area of research, you might also be interested in our full catalog of lab-made immunology reagents, including: