International and bay-area startups are in a R&D race to bring cell-based meat (also known as clean meat, cultured meat and in vitro meat) to market.

At its core, the concept of cell-based meat is fairly straightforward: myoblast stem cells are cultured and directed to form myocytes, which may then be compacted to form ground beef, chicken or fish. The immortalized cells must first be seeded onto a matrix (e.g. collagen, hydrogel, plastic culture plate), then be provided a growth medium and the appropriate growth factors to propagate and form the appropriate terminal cell. The result? High-quality muscle cells identical to those consumers are familiar with, without the presence of viruses and bacteria. 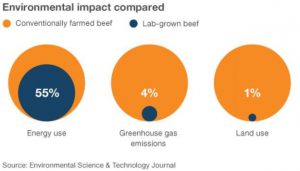 Cell-based meat promises a wealth of ethical benefits. Reductions in unnecessary animal suffering, land degradation, greenhouse gas output, foodborne illness and food insecurity all represent calls to action for startups to bring their product to market. While the technology has come a long way from its humble beginnings in 1971 when Russell Ross first cultivated smooth muscle tissue derived from immature guinea pig aorta, researchers still face a number of obstacles as they chase the golden (cultured) goose. Reducing cost and improving product complexity and scale both represent challenges standing in the way of bringing cell-based meat to market.

When Netherlands professor Mark Post first unveiled three five-ounce burgers in a landmark media event back in 2013, one pound of the 100% lean beef cost just north of $1 million and three months to produce. Since then, Post has been able to cut costs to $37 a pound. Israeli startup Future Meat Technologies produces a similar product at $363 a pound, but has set a goal of reaching $2.30-$4.50 a pound by 2020 — reaching or even crossing price parity with conventional ground beef. One of the main limiting factors for producing the meat is finding an economical animal-free replacement for the fetal-bovine serum (FBS) required for culture, which costs hundreds to thousands of dollars per liter. Alongside developing serum-free culturing techniques, optimizing methods of growing myosatelites in suspension promises reductions in price, as adherent cells are more labor-intensive and require more reagents like trypsin be used in production.

Implementing xenofree 3D cultures, rather than using monocultures producing 100% lean beef or chicken tissue, promises products that are more structurally complex; however, doing so proves to be challenging. Using large bioreactors to form monocultures makes it difficult to transfer the cells to fresh medium through passaging. Coculturing, the process of growing multiple cell types together, presents a new set of challenges to cell-based meat labs. Different growth rates between cell types may create competition for media, leading to competitive exclusion in which one cell type displaces the other. Additionally, cell-cell interactions must be carefully studied and categorized, as surface-protein interactions and the interplay involving the extracellular environment greatly influences the behavior of proximate cells.

Cultured meat companies have recently caught an administrational break, however. On November 16th, the FDA and USDA released a statement promising a “a joint regulatory framework wherein FDA oversees cell collection, cell banks, and cell growth and differentiation” while production and labeling would be overseen by the USDA. Much to the relief of cell-based meat startups, the agencies noted that no new legislation would need to be introduced to help regulate the product.

With venture capital in their sails and a regulatory framework rudder, startups speed forward on a mission to bring a cleaner and more ethically-produced meat to the masses. Despite the issues of cost, scale, and complexity in cellular agriculture and tissue engineering, researchers in the for-profit, academic, and medical communities remain steadfast.

At Kerafast, we support scientists working toward research advances in a variety of fields through facilitated access to unique lab-made reagents. If you’re interested in the clean meat industry, check out our myosin research products, as well as our chicken induced pluripotent stem cells from the University of Georgia.