An international research team, led by scientists from Yale University, has identified a new immunotherapy target for treating colorectal cancer, developing an antibody that successfully reduces tumor formation in animal models. Though the antibody still needs to be tested in humans, it could eventually be used as a new immunotherapy inhibitor to treat colorectal and other cancers.

The study was published in Nature Medicine and cites our MC-38 colon adenocarcinoma cell line. This cell line was made available by the laboratories of Dr. James W. Hodge and Dr. Jeffrey Schlom at the National Cancer Institute/NIH.

According to the CDC, colorectal cancer is the third most common cancer in men and women. The NCI estimates that more than 50,000 people will die from this form of cancer in 2018, representing 8.3% of all cancer deaths. From 2008 to 2014, more than 35% of those diagnosed with colorectal cancer did not survive more than five years.

To better treat colorectal and other forms of cancer, researchers have been developing immunotherapies. These therapies, which have become an important treatment option over the last few decades, leverage a person’s immune system to fight diseases such as cancer. For example, immunotherapy might stimulate the immune system to work harder or more effectively, or suppress overactive immune proteins. 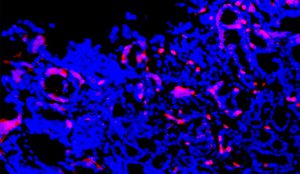 In the new study, the researchers looked at a specific protein called DKK2, which is a known inhibitor of the Wnt signaling pathway. The Wnt pathway is an evolutionarily conserved signal transduction pathway that regulates cell fate and development. It has also been linked to carcinogenesis and tumor promotion, most notably in colorectal cancers.

The research team crossbred a mouse model of colorectal cancer with mice lacking DKK2 and found that the offspring developed fewer and smaller tumors. They then developed an antibody to inhibit DKK2, which resulted in activation of the host’s natural killer cells, CD8+ T cells and other immune system components. The activated immune system effectively impeded tumor formation in colorectal cancer, as well as a subset of melanomas.

“We found that this Wnt inhibitor, DKK2, which was thought to inhibit tumor formation, promoted tumors through suppression of tumor immunity,” senior study author Dr. Dan Wu said in a press release. “If you inactivate, or neutralize, or blockade this inhibitor, it causes reduction of tumor formation through activation of the host’s immune system.”

The MC-38 colon adenocarcinoma cell line used in this research is available to scientists worldwide here, as are engineered versions expressing either MUC-1 or CEA. You might also be interested in our other research reagents for studying cancer or the Wnt signaling pathway, developed and made available by leading academic laboratories worldwide.