Scientists have uncovered new details about human ribosome production, pinpointing more than 100 regulators from a variety of cellular pathways with unexpected control over ribosome creation. The research team, from Yale University, hopes these findings can lead to a better understanding of the connection between ribosomes and human diseases such as cancer.

The study was recently published in Cell Reports and used our puromycin antibody, developed by the Kimball lab at Penn State College of Medicine, to measure protein synthesis.

Ribosomes are the cell organelles responsible for protein synthesis. Found either free in the cytoplasm or bound to the endoplasmic reticulum, ribosomes translate messenger RNA to amino acids to create new proteins. One mammalian cell may have as many as 10 million ribosomes, each of which can join amino acids at a rate of up to 200 per minute. 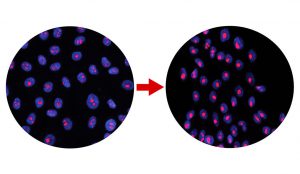 A Yale lab discovered proteins that can reduce the number of nucleoli, which make the cell’s ribosomes. The findings have implications for cancer research. (Image credit: Baserga Lab)

Ribosomes were first discovered in 1955 by George E. Palade, who later was co-recipient of the 1974 Nobel Prize in Physiology or Medicine for discoveries concerning the structural and functional organization of the cell. Ribosomes were also the subject of the 2009 Nobel Prize in Chemistry: three scientists shared the award for their research into the structure and function of the ribosome.

Ribosomes are created in the nucleolus, the largest structure found in a cell’s nucleus. Nucleoli are responsible for producing ribosomal RNAs and assembling ribosomes.

In the new study, the researchers looked specifically at ribosome biogenesis in the nucleolus, a highly regulated process but one that is not well understood. They conducted a genome-wide screen of more than 18,000 proteins to find those critical to nucleoli formation and found 139 proteins whose depletion reduced the number of nucleoli in a given cell.

They then looked more closely at those protein hits and found that many played essential roles in ribosome biogenesis, affecting either rDNA transcription, pre-ribosomal RNA processing and/or global protein synthesis. The proteins regulating ribosome production were from a diverse range of cellular pathways.

A better understanding of ribosome biogenesis helps pave the way for new studies into how ribosome biogenesis influences human diseases. For example, ribosomes have long been linked to cancer. Cancerous cells take advantage of a host cell’s ribosomes to produce the proteins necessary for their rapid growth, while an increase in nucleoli has been correlated with worse patient outcomes.

There are also specific disorders of ribosome biogenesis, termed ribosomopathies, that result from mutations in ribosomal components. These disorders can cause conditions such as anemia and abnormal facial features. As ribosome biogenesis is better understood, researchers will hopefully be able to develop new therapeutic drugs that target the proteins involved in the process.

The puromycin antibody used in the study to measure global protein synthesis is available to researchers worldwide here. You might also be interested in other available reagents for translation research, including: