A world of many (cell) cultures 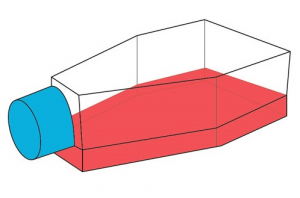 Cell culture is the growth and maintenance of cells outside of their normal environment. Growing tissues and cells outside of the body dates back to the 19th century. In 1885, Wilhelm Roux demonstrated the principle of cell culture when he maintained tissues of an embryonic chicken in warm saline solution for several days. In the early 20th century, the biologist Ross Granville Harrison successfully cultured frog nerve cells in culture and observed neural outgrowth over a period of several weeks. Harrison is today credited as the father of modern tissue culture. Scientists refined culture techniques in the mid-20th century to support the growing interest in viral culture for vaccine development. Jonas Salk’s polio vaccine was one of the first to be mass produced using cell culture techniques applied to monkey kidney cells. Today, the supplies for cell culture are produced commercially and are a staple in any biology lab.

Broadly, cells require a sterile environment and a steady supply of nutrients to grow. In living organisms, cells live in natural media such as plasma, lymph and tissues. To grow cells outside of a body, scientists must understand which components of natural media are important and then replicate them in an artificial system. Biologists meet these conditions by growing cells in sterile flasks or plates stored in incubators that hold a constant temperature and carbon dioxide level, usually 37C and 5% CO2. Cells either grow directly on the surface of the flask (adherent cells) or grow while floating freely (suspension cells). In either case, scientists use cell culture media to supply the necessary nutrients to keep cells happy and growing.

Cell culture media will depend on the specific cell line, but media must contain the following: inorganic salts, a buffering system, a carbohydrate source, amino acids, vitamins and serum. It is important to understand how each of these components contributes to the overall system.

Inorganic Salts – Cells use salt ions to balance their membrane potential and keep osmotic balance with the extracellular environment. Sodium, potassium and calcium are usually added to media to help cells maintain their structure and normal cellular functions.

Buffering system – Cells grow best in a specific pH range (usually 7.2-7.4). It is critical to maintain that pH range, so modern media usually has a bicarbonate buffer in it to balance with the CO2 of the incubator. The phenol red present in many medias serves as a pH indicator. If the environment is too acidic, it turns yellow and if it is too basic, it turns purple.

Vitamins – Cells require B vitamins to grow and proliferate. Many modern-day media are supplemented with B vitamins and less commonly with vitamins A and E.

Serum – In the United States, serum usually comes from fetal cows. Serum contains proteins and peptides, fatty acids and lipids, and other growth factors that help cells to grow. Some specialized cells grow best in serum-free media, and so the user will often add anything required for growth (i.e. fibronectin, cholesterol).

Correct selection of culture media is essential for successful cell growth. Most vendors recommend a specific type of media along with suggested culture conditions. Some cell lines can grow in multiple medias, but others are sensitive to the amounts and ratios of the components listed above.

At Kerafast, we outline the growth conditions and required media for all the cells in our catalog. We also provide specialized culture media for cells that are beyond standard. For example, primary cell types, such as hepatocytes, have a defined media first described by the lab that isolated them. Other cells, such as primary pancreatic cells, have the potential to differentiate and will change their phenotypes depending on the media. Be sure to select the correct media depending on the differentiation state you require for your research. Need a custom-made media for a cell line you are working with? Kerafast collaborates with H.B. Custom Media to supply your lab with the correct media components.