Jonas Salk, best known as the creator of the polio vaccine, was born 103 years ago this October 24. In honor of the anniversary of his birth – now celebrated globally as World Polio Day – we’re highlighting his life’s many achievements, from his early work protecting US soldiers from influenza during World Word II, to his groundbreaking polio vaccine, to creating the Salk Institute for Biological Studies.

An appetite for vaccines

Jonas Salk was born to Russian-Jewish immigrants Daniel and Dora Salk in New York City on October 28, 1914. After receiving his Bachelor of Science degree in Chemistry from City College of New York in 1934, Salk went on to attend the New York University School of Medicine, from where he earned his medical degree in 1939. During his last year at NYU, Salk began work in the lab of Thomas Francis Jr., who had recently been the first to isolate the influenza virus. It was during this time that Salk developed an appetite for virology and vaccines. 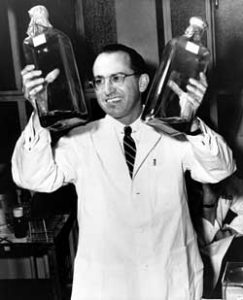 Jonas Salk at the University of Pittsburgh, where he developed the first polio vaccine.

Following his residency at Mount Sinai Hospital, Salk reconnected with his old mentor Thomas Francis Jr. at the University of Michigan in 1942. Together they developed a vaccine for influenza that was widely used in World War II to protect the armed forces. Gaining fame in the vaccine community, Salk was appointed director of the Virus Research Lab at the University of Pittsburgh School of Medicine in 1947. The main mission of his work in Pittsburgh was to develop a vaccine for polio, the most feared disease of the 20th century.

Polio virus is a very contagious enterovirus that spreads through the fecal-oral route. The virus takes up residency in the throat and intestines, replicating in the gastrointestinal tract. Polio shreds in the fecal matter of infected individuals, and can live in the feces for many weeks, contaminating food and water supplies. For example, public pools were a safe harbor for the polio virus, where it could easily affect unsuspecting swimmers who accidentally ingested infected pool water. In a small fraction of cases, the virus spreads in the central nervous system, destroying motor neurons in the spinal cord and brain stem along the way. This route of infection leads to paralytic poliomyelitis, in which the infected have compromised motor capabilities. By the 1950s, polio was a global pandemic and a vaccine was desperately needed.

Perhaps the most famous case of polio was president Franklin D. Roosevelt, who contracted the virus while vacationing in 1921. FDR had a severe case where his legs were permanently paralyzed and the remainder of his life was spent confined to a wheelchair. After five years as president, FDR helped create the National Foundation for Infantile Paralysis, which was later rebranded the March of Dimes Foundation. The March of Dimes used celebrities and famous cartoon characters like Mickey Mouse to raise money for polio research. By the end of the 1940s, the foundation was raising more than $20 million dollars a year and donating it to scientists working on polio vaccines. One of these beneficiaries was Jonas Salk.

Salk revolutionized vaccine development by going against the accepted dogma of the time – that a vaccine could only be effective by using a live, weakened virus. Salk’s vaccine used a killed polio virus that had been destroyed with formaldehyde. The virus was still intact enough to trigger an immune response without the risk of contracting the virus. He was a firm believer in his vaccine, so much so that he used himself, his family and his lab staff as the first guinea pigs. They all developed antibodies against the virus with no side effects. After publishing his results the following year, widespread testing began in 1954. Coined the “Polio Pioneers”, one million children ages six to nine were effectively immunized against polio with Salk’s vaccine. This campaign was the largest public health experiment in American history. The results: the average number of polio cases per year in the United States dropped from more than 45,000 to 910. Salk never patented his vaccine or received any monetary benefit from his discovery. When asked in a CBS interview who owned the vaccine, Salk replied, “Well, the people I would say. There is no patent. Could you patent the sun?”.

Salk founded the Salk Institute for Biological Studies in La Jolla in 1963 as a center where new scientists could begin their careers. A major institute for cellular and molecular biology, the Salk Institute remains a world-renowned scientific center today. Salk spent his last years searching for a vaccine against HIV. He died on June 23, 1995. His birthday, October 24, is today recognized as World Polio Day.

Interested in vaccine research? Check out products from Dr. Hilary Koprowski’s lab. Dr. Koprowski developed the first oral polio vaccine based on an attenuated virus. You also may be interested in our reagents for studying influenza, HIV and other infectious diseases.