Time flies when you have no circadian rhythm 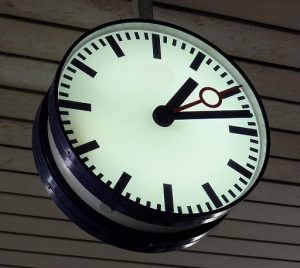 The circadian rhythm is our internal clock that lets us know when it is time to sleep, wake up and eat. This biological timer takes input from external stimuli such as light and temperature and affects every living organism. When we are out of sync with our circadian rhythm (i.e. from sleep deprivation), we can become moody and irritable, have cravings for bizarre foods, and have intense feelings or emotions. This is familiar to us on a macro, whole-body level, but nearly all of the cells in our system have their own internal clock as well, regulating their individual processes according to a set biological rhythm.

After the first discoveries of the circadian rhythm family of proteins in flies, called per, the general thought was that one part of the brain, the suprachiasmatic nucleus, was the master time keeper and reported out to the rest of the body. The idea was that when we wake up in the morning and see the first beams of sunlight, our brains send a signal to our cells that the day has begun. The cells in our bodies interpret this signal to mean they must prepare for any biological need that may come up (think energy production, metabolism, repair mechanisms). Proteins called transcription factors translocate to the “brain” of the cell, the nucleus, and bind to DNA to trigger synthesis of the average daily proteins that are important to that particular cell type, whether it be a skin cell or a liver cell. Throughout the day, protein production and cellular activity rises and falls with the circadian rhythm. When it gets dark, things start to slow down, we become tired and head off for another night of rest.

In 1998, Ueli Schibler reported in Cell that cells did not need a remote time keeper; they could keep time themselves in the absence of a body. Their protein production rises and falls with the times of the day without seeing sunlight or receiving input from a central nervous system. Researchers now know that the cell-specific clock, called peripheral clocks, mirrors the central clock in the brain by using two proteins to regulate time-specific transcription: CLOCK and BMAL1. CLOCK and BMAL1 regulate the daily cellular work by triggering transcription of required genes, such as per. As is the case for many other biological phenomena, CLOCK, BMAL1 and PER are involved in a negative feedback loop. In other words, as PER builds up in the cell, it inhibits CLOCK and BMAL1 until their levels fall. Because there is not enough of the dynamic duo to trigger more production of PER, PER levels decrease enough to get CLOCK and BMAL1 going again and the cycle continues. This process works for most cells in our bodies, but the ones which do not keep time are intriguing – stem cells and cancer cells.

Stem cells and cancer cells are two major types that do not use the conventional clock and march to the beat of their own drum. For stem cells, the intuitive hypothesis is that they do not yet have a cell identity and thus cannot yet adopt a clock. The job requirements and working hours are different for a heart cell versus a brain cell. During the differentiation process, when the cell learns its fate, the clock comes on and begins ticking. For cancer cells, shutting off the clock is perhaps biologically advantageous. Without a regulator, it can continue to make more proteins and divide uncontrollably, the hallmark of cancer.

Researchers from the Medical University of South Carolina, a Kerfast providing institution, published in Nature Cell Biology last month on this very topic. The team, led by J. Alan Diehl, examined the relationship between the unfolded protein response (UPR) and circadian rhythm in lymphoma cells. It has been established that tumor cells use the UPR to their advantage, allowing for fast replication without toxic build-up from misfolded or defunct proteins. They also knew that the circadian rhythm was unregulated in tumor cells, and so wanted to test the hypothesis that there was a relationship between the two. Diehl’s group found that when the UPR is activated, BMAL1 is suppressed throughout the entire day-night cycle, throwing off the circadian rhythm of the cancer cells. Furthermore, when they looked at patient data from breast, gastric and lung cancers, they found that there was a correlation between better survival and higher expression of BMAL1. Based on the data, they hypothesize that tumors that are able to activate the UPR and suppress BMAL1 can overcome the imprinted biological clock and grow unchecked. This research is significant as it could open therapeutic opportunities based on resetting the cell’s natural circadian rhythm.

Interested in conducting your own research on circadian rhythm? Check out these products available through Kerafast: