For reasons that are not fully understood, mammalian cardiac muscle cells do not regenerate after suffering an injury. After a heart attack, for example, many of these cells, called cardiomyocytes, are lost and the body is unable to replace them. With fewer cardiomyocytes, the body cannot pump blood as efficiently, which leads to the increased mortality associated with heart disease.

Researchers from the University of Pennsylvania have now found a way to restart replication in existing cardiomyocytes. Their work was recently published in Nature Biomedical Engineering.

A gel that regrows cardiomyocytes 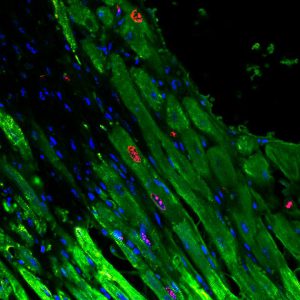 In the new study, the research team developed an injectable gel that slowly releases into heart muscle microRNAs related to cell proliferation signaling pathways. The microRNAs inhibited stop signals that typically keep cardiomyocytes from replicating, reactivating the cells’ ability to divide and reproduce.

Mice treated with this gel after a heart attack showed improved recovery compared to those who did not receive the gel; treated mice were able to pump more blood with each heartbeat, and their heart sizes did not enlarge as much.

The researchers also tested the gel in two other types of mouse models. First, in normal, healthy mice, the gel caused heart tissues to express increased biomarkers of cardiomyocyte proliferation. In addition, the researchers looked at genetically engineered “Confetti mice”, in which individual cardiomyocytes randomly express one of four fluorescent proteins. These fluorescent labels permitted the research team to see that individual cardiomyocytes were indeed dividing in response to the gel treatment after a heart attack.

One of the challenges faced by the researchers was determining the best way to deliver the right dose of microRNAs to the cardiomyocytes. They needed to make the microRNAs stick around in the bloodstream long enough to be effective; biologic drugs have very short lifespans. At the same time, they also had to protect against off-target effects; because the microRNAs promote cell proliferation, they could cause tumors if left unchecked.

“We want to design the right material for a specific drug and application,” senior author Dr. Jason Burdick said in a press release. “The most important traits of this gel are that it’s shear-thinning and self-healing. Shear-thinning means it has bonds that can be broken under mechanical stress, making it more fluid and allowing it to flow through a syringe or catheter.  Self-healing means that when that stress is removed, the gel’s bonds re-form, allowing it to stay in place within the heart muscle.”

Up next, the researchers plan to test the gel in vitro with human heart cells, as well as in vivo with animals such as pigs that have more human-like hearts. This research could eventually lead to life-prolonging therapies. In addition, the scientists hope the microRNA-gel approach could be used in other regenerative medicine research, as an alternative to stem cell delivery.

If you work in this area of research, check out our reagents for cardiovascular research to see if any could accelerate your studies. You also might be interested in several previous blog posts: