Nature does some pretty cool things and some very cruel things. Scientists have been fascinated by zombie ants for some time. These ants depart from their nest and normal duties to bite a piece of vegetation, after which they soon die. New research at the University of Central Florida sheds light on the mechanism by which a pathogen controls this strange activity. 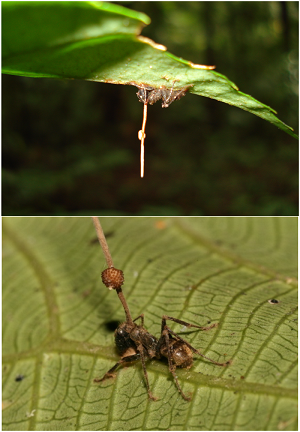 Dead ants with spores growing from their heads. From Wikipedia.

Ants are infected with the fungal parasite in rainforest areas, most predominantly in Thailand and Brazil, although they can be found globally. For de Bekker and team, the pathogen and host are also present in the Little Big Econ State Forest and the UCF Arboretum, making it possible to do both laboratory and field studies in close proximity.

Biological clocks, or circadian rhythms, play a role in numerous insect activities. Worker ants become infected with the fungal parasite while they are foraging on the forest floor. It has previously been demonstrated that ants infected with the fungus always looked for and bit an elevated piece of vegetation at a particular time of day. The host ant remains there and dies at the vegetation site in a period of 4-10 days, during which the fungus is reproducing and producing spores. A dark spore-carrying stalk grows out of the ants’ head (more zombie-like properties) and the spores are released, perpetuating the fungus.

Work in the laboratory

In the laboratory, Dr. de Bekker, graduate student Ian Will, and their colleagues infected ants with O. kimflemingiae and maintained them under controlled light to create constant 24-hour conditions and thus coordinated biological clocks.

The researchers isolated fungal parasites from the ants, sequenced the RNA and performed real-time quantitative PCR to analyze expression of biological clock genes. Expression of some genes was upregulated during the light phase and others during the dark phase. They did not observe as many changes in expression during “dawn” or “dusk” hours.

Evidence for a circadian clock type of mechanism

Based on their data, the researchers concluded that the Ophiocordyceps species are fungi able to manipulate behavior of their ant hosts by up or down regulating their own clock control genes. They propose that daily timing is involved in the regulation of the ant host’s activities, such as leaving the nest and biting vegetation. In future studies, Dr. de Bekker and team plan to shed light on the mechanism by which host biological clocks and behavior are manipulated by circadian rhythms of parasites.

Do you work in the area of parasitology infectious disease research? Our catalog has a variety of proteins, antibodies and cells lines associated with microbiology, parasitology and infectious disease research. For those studying circadian rhythm, we offer a Suprachiasmatic Nucleus Cell Line from Texas A&M University, as well as Zebrafish Circadian Clock Model Analysis Services from Tel Aviv University.