Researchers have identified a two-step mechanism responsible for activating a protein that triggers blood clotting in humans. The protein, called the von Willebrand factor, walks a fine line: clotting too much can lead to life-threatening blood clots, while clotting too little can cause uncontrollable bleeding. 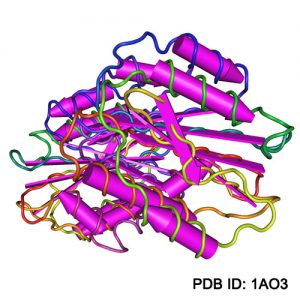 The research team captured video of the von Willebrand factor in action, revealing how the protein uses a two-step conformational transformation to activate blood clotting. The research, published in Nature Communications, could aid in the development of new therapeutics for blood-clotting disorders. We were also excited to see the paper cited our traptavidin protein, developed by the lab of Dr. Mark Howarth at the University of Oxford to address several limitations of the often-used biotin-binding streptavidin protein. The lab’s traptavidin offers a 10-fold slower biotin off-rate, increased mechanical strength and improved thermostability compared to streptavidin.

Researchers have long suspected that the von Willebrand factor is mechanically activated by blood flow. However, until now, scientists could not visualize the exact process. In the new paper, the research team developed microfluidic and single-cell fluorescence imaging tools that allowed them to capture individual von Willebrand factors on camera, under conditions similar to natural blood flow.

The team – comprised of scientists from Boston Children’s Hospital, Harvard Medical School and Shire – showed that the von Willebrand factor is activated in a two-step process. Under normal conditions, von Willebrand factor has a compact and globular shape. When blood flow increases, a change indicative of an injury, the molecule quickly elongates to a linear form. However, this change is not enough to activate blood clotting. Only when the blood flow reaches critically high tension levels does a second transition occur, which allows the von Willebrand factor to adhere to circulating platelets and start the blood clotting process.

“If you can imagine stretching out your arms, and then opening your hands to capture platelets, that’s basically what we are seeing VWF do in response to bleeding,” one of the paper authors, Dr. Wesley P. Wong, said in a press release. “It’s so important that this process occurs only when and where it is needed – this two-step activation process makes that possible.”

A variety of blood-clotting disorders can affect patient populations. Excessive blood clotting, also called hypercoagulation, can be caused by genetic mutations as well as acquired conditions such as obesity or pregnancy. Possible effects include a stroke, heart attack, pulmonary embolism or deep vein thrombosis. On the other hand, different disorders impede a person’s ability to clot blood, resulting in hard-to-stop bleeding after an injury. Hemophilia is perhaps the most well-known clotting disorder, while Von Willebrand disease is the most common inherited bleeding disorder; according to the NIH, it affects 1 out of every 100 to 1,000 people.

The research team therefore hopes the new findings could inspire novel treatment options for clotting-related diseases. For example, smart drugs could be designed to treat blood clotting only in specific areas of the body. One possibility: anticoagulants that mimic the von Willebrand factor’s two-step activation process, reducing the risks of excessive bleeding.

Do you work in this area of research? The traptavidin protein used in the study is available to investigators worldwide here. In addition, our catalog offers a variety of unique lab-made reagents for cardiovascular research, in particular materials for studying coagulation, such as: