Humans possess a number of mechanisms that provide protection against a multitude of pathogens, such as viruses, bacteria and parasites. Unfortunately, there are instances when the immune system that monitors and disposes of pathogens can react to an individual’s own cells. This aberrant response is known as autoimmunity and can lead to the development of autoimmune disease. More than 80 autoimmune diseases are known to exist and include rheumatoid arthritis, inflammatory bowel disease and type 1 diabetes (T1D), to name a few.

In T1D, an individual’s immune cells destroy the beta cells of the pancreas. Beta cells are responsible for the production and secretion of insulin, a hormone that allows the body to use or store glucose from foods. People with T1D suffer from high blood glucose that can result in blindness, kidney failure, nerve damage, heart attack, stroke and in extreme cases can lead to coma and death. The only treatment available is insulin therapy through injection or continuous infusion with a pump; however, insulin treatment does not cure the disease or necessarily prevent the onset of other health effects associated with T1D. It is estimated that as many as three million Americans may have T1D and must be diligent in the lifelong management of the disease. 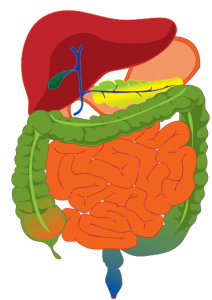 Nonobese diabetic (NOD) mice were used as a model of spontaneous T1D; however, NOD mice expressing a variant of MHC-II (Eα16/NOD) were protected from the development of diabetes, a trait that was passed on to their offspring. Alterations to the gut microbiota are known to increase susceptibility to diseases as these bacteria are critical in maintaining immune homeostasis within the body. The researchers examined the effects of altered gut microbiota by treating mice with antibiotics at different stages of life and by preventing the development of the gut microbiota by raising mice in germ-free conditions. The previously non-diabetic Eα16/NOD mice developed inflammation of the pancreas, a precursor to diabetes, when treated with antibiotics early in life or when housed in germ-free conditions. Offspring whose mothers were dosed with antibiotics during pregnancy also developed pancreatic inflammation. These results indicate that the early development of the intestinal microbiota plays a critical role in regulating the development of diabetes. Genomic and proteomic analysis of the intestinal microbiota of NOD mice and Eα16/NOD mice raised in the various conditions demonstrated significant differences in the intestinal microbiota. Further, the transfer of intestinal bacteria from non-diabetic Eα16/NOD mice to NOD mice suppressed the development of diabetes.

These findings indicate that changes in the intestinal microbiota may precipitate the development of diabetes, especially when perturbations occur in early life. Clinically, medical professionals may want to rethink the use of antibiotics in infants and pregnant women as well as include treatments that work to maintain the balance of the gut bacteria.

Do you work in this area of research? You might be interested in one of our reagents for studying bacteria or diabetes, including: