Adaptation to pesticides in frogs is complex

Researchers from several institutions recently collaborated to study the evolution of pesticide tolerance in amphibians. Their research, published in Evolutionary Applications, continues the work of Dr. Jessica Hua and others who demonstrated that there are two different mechanisms by which pesticide tolerance may evolve. 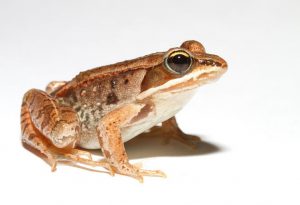 The use of pesticides in agriculture can also affect non-target species and disrupt ecosystems. While pesticides improve crop yield and reduce the population of disease-spreading vectors, both pest species and non-pest species have been shown to evolve a tolerance to pesticides. The researchers – from Binghamton University, Rensselaer Polytechnic Institute, Southwestern Oklahoma State University and Purdue University – describe two methods by which non-target species acquire tolerance. The first, selection for constitutive tolerance, occurs over several generations. The second, inducible tolerance, occurs within a single generation via phenotypic plasticity.

The researchers utilized wood frogs (Lithobates sylvaticus) as a model system, studying fifteen populations with varied proximity to agriculture. Wood frogs live in a pond ecosystem and may be subject to pesticides directly or via run-off or aerial drift. Dr. Hua in a previous study found that populations of frogs living closer to crop growth had higher baseline tolerance to a common pesticide, carbaryl, but had no inducible tolerance to carbaryl and thus displayed constitutive tolerance. Conversely, populations habituating farther from agriculture have a low baseline but high inducible tolerance.

Increased tolerance to pesticides in non-target species is good news. For example, frogs living near agriculture are important and the intent of pesticide use is not to disturb their ecosystem and decrease their population numbers. However, the research team found some bad news. According to one of the investigators, Dr. Rick Relyea, professor of biological sciences and director of the Darrin Fresh Water Institute at Rensselaer, “with that tolerance there is a tradeoff, which is that they become more susceptible to parasites that, in the case of ranavirus, can wipe out entire amphibian populations.”

Amphibian response to parasites is very complex and concerning as amphibians are declining worldwide. The researchers looked at wood frogs from the fifteen populations and their response to stressors in addition to pesticide use, including ranavirus. They found that amphibians living closer to agriculture with a higher level of tolerance had higher ranavirus viral loads than populations farther from pesticide use and agriculture with a higher inducible tolerance.

Ranavirus has the capability to wipe out amphibian populations. It is a double-stranded DNA virus (dsDNA) capable of infecting amphibians and reptiles (including species of tortoises, snakes, lizards and geckos). Other related viruses are very detrimental to fish populations. It is thought that ranavirus evolved from a related fish virus that gained the ability to infect reptiles and amphibians. Ranavirus has been implicated as a factor in the decline of amphibian populations in recent years.

As researchers learn more about the use of pesticides and its effect on tolerance of nearby species of flora and fauna, it is clear that these ecosystems are very complex and fragile. As tolerance rapidly evolves, tradeoffs exist of which we must be conscious.

Kerafast works with researchers around the world, including those from Binghamton University and Purdue University, to help them share their research reagents with other scientists. Our catalog includes a wide range of unique reagents and cell lines to accelerate your research.