With more than 300,000 species identified to date, plants represent a rich diversity with distinct morphology and physiology. Humans have used plants for thousands of years for a variety of purposes, including food and medicine (see figure).

Top Documented Use of Plant Species 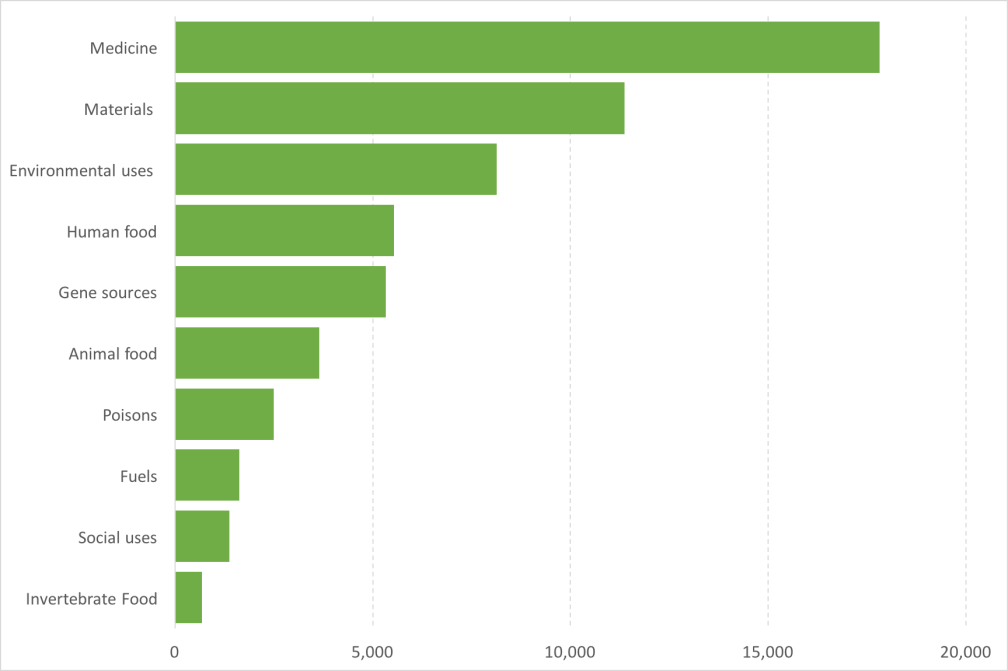 Like other species, plants have evolved mechanisms to thrive in their environment, such as protection from predators, access to food sources and inter-plant communication. Plants have developed a specialized metabolism that can collectively produce more than a million novel compounds or metabolites, earning the title nature’s chemists. Some of these metabolites are common across many plant species, called primary metabolites, and have been ascribed to conserved pathways important for basic plant functions. Others, known as secondary metabolites, are more specialized and are only produced by a small group of related species. Studying plant metabolites and their biosynthetic pathways can offer a peek into the past and help scientists draw conclusions about plant evolution.

A group led by Dr. Robert Last at Michigan State University recently published a study on acylsugars, a nitrogen-lacking metabolite produced by the Solanaceae family of plants. This family, also called nightshades, includes more than 2700 species, such as tomatoes, tobacco and petunias. The MSU team looked specifically at acylsugars produced in the small hairs that grow on the leaves and stems of some nightshades, called trichomes. Acylsugars are part of the defense system of nightshades. For example, tomatoes use acylsugars to ward off whiteflies, a common tomato pest. Using genomic and proteomic approaches, these researchers have started to uncover the complicated history of Solanaceae evolution.

Acylsugars have simple building blocks (a sugar core and acyl chains) and are made by a series of chemical reactions, catalyzed by enzymes. Last and his group demonstrated that these enzymes can use a variety of starting molecules to begin their synthetic pathways, suggesting that these proteins are promiscuous. By using different starting points, the same enzyme can produce a variety of acylsugars. In other words, it is not one enzyme-one acylsugar. This system lends itself to diversity and can help explain the wide variety of these metabolites found in nightshades. Further, the authors traced back many of the acylsugar enzymes to genes that had previously served a different function in the overall physiology of the plant. Many of the encoding genes have been duplicated over the course of Solanaceae evolution and assigned novel functions based on subtle changes in substrate specificity or via transcriptional regulation.

Uncovering the mystery behind metabolite diversity in plants is significant. Acylsugars are a natural pesticide that agriculturalists could take advantage of by breeding plant species or engineering plants through genetic manipulation. As more plant metabolites and their pathways are identified, chemists can explore their uses in medicine and process engineering.

While tomatoes have evolved a complex metabolism, the fundamental question remains: is a tomato a fruit or a vegetable? The distinction between the two is that a fruit develops from the fertilized ovary of a flower, while vegetables are any edible part of the plant that is not a fruit. By this definition, tomatoes are fruits while cabbage, carrots and potatoes are vegetables. The Supreme Court weighed in on this discussion in 1886 in a case involving taxes on imported vegetables. John Nix, an importer, refused to pay the 10% vegetable tax, claiming correctly that tomatoes are a fruit and should thus be exempt. The Supreme Court sided with the state, citing that tomatoes are colloquially referred to as vegetables, despite their biology. So the answer is tomatoes are a fruit biologically but a vegetable legally!

Do you work in this area of research? Our catalog includes a wide variety of reagents for studying plant biology, including: