Parkinson’s disease (PD) is a neurodegenerative disease resulting in the loss of the neurotransmitter dopamine as nerve cells slowly die. One function of dopamine is to regulate motor control. Consequently, as PD progresses, individuals may experience tremors, rigidity, difficulty walking, slowed movement and cognitive decline. There is no cure for PD and current treatment relies on alleviating the associated symptoms. Currently, the most effective treatment for PD is carbidopa-levodopa, a drug that is converted to dopamine after passing the blood-brain barrier.

The exact cause of PD is unknown but believed to involve the complex interaction between genetic predisposition and environmental triggers. Changes in the brains of patients with PD have been noted, and the accumulation of a nerve cell protein, alpha-synuclein (αS), is believed to play a significant role in the disease. Interestingly, αS accumulation is believed to begin within the enteric nervous system and is then transported into the brain, but the function of αS is poorly understood. Researchers from Georgetown University, the University of Oklahoma, and the National Institutes of Health collaborated to examine the role of αS within the gastrointestinal (GI) tract. Their findings were published in the Journal of Innate Immunity. 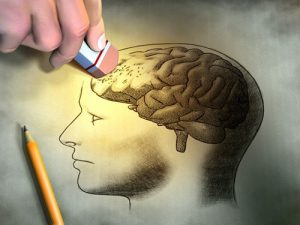 Previous research indicates that αS may be involved in the inflammatory response. Michael Zasloff, MD, PhD and colleagues obtained intestinal biopsy samples from patients with GI inflammation and patients who had undergone intestinal transplants. The samples were assessed for degree of inflammation and the presence of αS. Specimens from the patients with GI inflammation displayed significantly elevated levels of αS in inflamed tissues. The relationship between infection, inflammation and αS was examined by assessing the biopsies from intestinal transplant patients. These patients are immunosuppressed and closely monitored for infections, allowing for the analysis of sample collected pre-infection, during infection and post-infection. The results demonstrated that low levels of αS expression were present pre-infection but increased significantly during active norovirus infection. Expression of αS decreased as the infection cleared. Given the increase in concentration of inflammatory cells associated with αS expression, the researchers then tested the chemotactic abilities of αS. Both monomeric and aggregated αS were chemoattractant for monocytes and neutrophils.

These results indicate that αS released by the enteric nervous system promotes inflammation within the GI tract in response to GI infection. This process appears to be normal and is acting as a homeostatic mechanism to clear an infection. The researchers hypothesize that the onset of Parkinson’s disease from αS accumulation in the brain may be linked to the overproduction of αS in response to chronic GI infections and consequently, an overactive innate immune response.

Check out our reagents for neurobiology research, including the Human Neural Stem Cell Line (LM-NSC008) from City of Hope and the Stable SH-SY5Y HFE Expressing Cell Lines from Penn State College of Medicine, a useful cell culture model for studying neurodegenerative diseases.