A Kerafast providing lab from the University of Saskatchewan recently published a paper exploring why bats are immune to SARS and MERS, respiratory diseases that cause serious and often deadly illness in humans. The lab of Dr. Vikram Misra has determined that bat cells employ a unique mechanism to suppress inflammation when infected with viruses, information that could help in the development of human therapeutics. 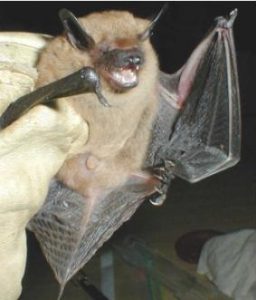 The Misra lab recently established a bat cell line that can be used to successfully cultivate various viruses, including MERS, Ebola, rabies and more. The cell line, now available via Kerafast, is the first commercially available cell line developed for North American bats. The cell line’s generation and characterization are described in a Journal of Virological Methods article from November 2016.

In the new study, published in Scientific Reports this May, the lab used the cell line to study how bats’ immune response to coronaviruses compares to that of humans.

Coronaviruses usually cause mild to moderate illnesses like the common cold, but this virus type is also responsible for MERS (Middle East Respiratory Syndrome) and SARS (Severe Acute Respiratory Syndrome). SARS was first reported in 2003 in China. It spread throughout the world, infecting more than 8,000 people and killing 774 before being contained. Since 2004, there have been no new cases of SARS.

MERS first emerged in 2012 in Saudi Arabia. It has since spread to several other countries, killing approximately 35% of infected patients. Both SARS and MERS are thought to have originated in bats, before being transmitted to other animals and humans.

The Misra lab wanted to explore why these diseases, so dangerous to humans, seem to leave bats unharmed. The hope is that a better understanding of bats’ defense mechanisms could lead to new treatments for humans.

In the new study, the Misra lab injected both human and bat cells with poly(I:C), a synthetic double-stranded RNA molecule similar to SARS. In both species’ cells, anti-viral genes were activated to combat the infection. However, only human cells expressed large levels of TNFα, a cell signaling protein involved in inflammation. In the bat cells, a transcription repressor called c-Rel prevented the inflammation signal. As a result, the human cells experienced severe inflammation resulting in tissue damage; the bat cells did not.

“In people these diseases work in a way that’s like revving your car at very high rpms for a long time — you end up destroying the engine,” lead author and PhD candidate Arinjay Banerjee said in a University of Saskatchewan news article. “Bats seem to have evolved to suppress the revs, even when you floor the gas pedal.”

Now, the research team is testing MERS infection on the bat cells to look for further clues about these deadly coronaviruses.

The lab’s bat cell line is available to scientists worldwide via the Kerafast platform here. If you work in this area of research, you might also be interested in additional unique virology and immunology reagents made available by other investigators, including: