Scientists use stem cells to study genetics of neurological disease

Stem cells are heavily studied and used as both therapies and disease models. In a recent paper, published in The American Journal of Human Genetics, researchers demonstrated the use of stem cells to study a neurological disease that is the result of several different types of mutations. 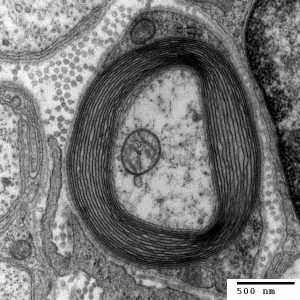 Transmission electron micrograph of a cross-section of a myelinated axon, generated at the Electron Microscopy Facility at Trinity College, Hartford CT.

Pelizaeus-Merzbacher Disease (PMD) is a rare genetic disorder that is categorized as a leukodystrophy, as it affects the myelin sheath that insulates central nervous system (CNS) nerve fibers. The onset of the disease is generally in early infancy and affected children usually first show signs of rapid involuntary movements of the eyes and decreased muscle tone. Depending on the severity, motor function may be delayed or never acquired. PMD, an X-linked recessive disease, is estimated to affect approximately 1 in 100,000 people in the United States.

The gene proteolipid protein 1 (PLP1), which codes for a myelin protein, is mutated in PMD. The mutations differ among individuals, however, and can manifest as partial, duplicate or even triplicate copies of the gene, missing parts of the gene or just a small base change. Due to hundreds of possible mutations, it has been difficult to model PMD and other diseases with a wide variety of underlying mutations.

In the new study, researchers at Case Western Reserve University School of Medicine developed human induced pluripotent stem cells (hiPSCs) – cells with the ability to develop into the three germ layers (endoderm, mesoderm or ectoderm) – from 12 individual children with PMD. Upon growing up the cells, the investigators found defects in the cells that were common across individuals and other defects that differed. According to Dr. Paul Tesar, who led the study: “By studying a wide spectrum of patients, we found that there are distinct patient subgroups. This suggests that individual PMD patients may require different clinical treatment approaches.”

Taking the next step, Dr. Tesar and his MD/PhD student and lead author Zachary Nevin developed a screening platform with the cells that can be used to assess potential therapies for their ability to repair myelin. Dr. Tesar said, “The stem cell platform could also help other researchers study and classify genetic disease with varied causes, particularly other neurologic disorders.”

Do you work in the field of neurobiology? Kerafast offers a wide range of unique neurobiology reagents, including hiPSCs and signaling molecules.