We recently wrote about a Nature study in which scientists identified a human monoclonal antibody able to protect pregnant mice and their developing fetuses from Zika virus infection. The research was led by Dr. James E. Crowe of Vanderbilt University, whose CD40L Expressing Feeder Cell Line, used to generate B cell cultures yielding human monoclonal antibodies, is available via the Kerafast platform.

Now, the research team has determined the structure of that human monoclonal antibody bound to Zika virus. Their results, published in Nature Communications, show how the antibody interferes with Zika infection. Knowledge of this mechanism could aid in the creation of new antiviral drugs and vaccines.

In the first study, the researchers isolated a human antibody that broadly neutralized several different strains of the Zika virus. However, the reason why this neutralization occurred remained unclear. In the new study, this question was explored by a team of researchers from Vanderbilt University, Purdue University and Washington University School of Medicine in St. Louis. 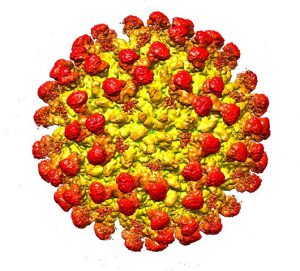 The Zika virus genome is held inside a protective shell containing 60 repeating units, each of which includes three envelope (E) proteins. When the virus attaches to a host cell’s outer membrane, a pH difference causes the E proteins to reorganize into trimers, exposing what are called “fusion peptides”. This mechanism allows the viral genome to be transferred to the host cell.

The research team used cryo-electron microscopy to determine, at a resolution of 6.2 Ångstroms, the three-dimensional structure of Zika virus while attached to the neutralizing antibody’s antigen binding fragment. They found that the antibody cross-links the Zika virus’ E proteins, preventing their reorganization into trimers. As a result, viral infection is inhibited.

The researchers also noted that a lower antibody concentration than expected was needed to inhibit infection, suggesting the antibody might be an especially promising therapeutic target. Because Zika’s protective shell is made of 60 copies of three E proteins, the team expected to need 180 antigen binding fragments to achieve neutralization. They found that one antibody copy binds six E proteins, so only 30 were needed. The antibody was therefore more potent than expected.

Translation to the clinic

Zika virus emerged as a significant global health threat last year. Zika is a flavivirus, a family of viruses caused by the Aedes mosquito that also includes dengue, West Nile and yellow fever. Zika has made global headlines for its ability to cause severe birth defects, including microcephaly, in children born to infected women, as well as the autoimmune disease Guillain-Barré syndrome in adults. As a result, the scientific community has been working to develop treatments and vaccines for the virus.

The neutralizing antibody, called ZIKV-117, was the first medical intervention shown to prevent Zika infection and damage to fetuses. The researchers are hopeful that their newly reported information about the antibody’s mechanism of action will aid in the fight against Zika, helping lead to the development of new antiviral drugs and vaccines.