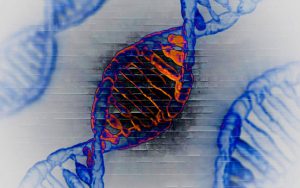 Research from geneticists at Trinity College Dublin, recently published in Nature Communications, has identified a short list of genes implicated in many neurodevelopmental disorders and diseases, including autism, schizophrenia, ADHD and epilepsy.

The study focused on regions of the genome called ‘copy number variants’ (CNVs). Common in humans, CNVs are areas of DNA that are duplicated or deleted in some individuals. As a result, some genes are found to be present in one, three or more copies within an individual, as opposed to the traditional two copies.

Not all CNVs have phenotypic consequences; the genes within that region of DNA function similarly no matter how many copies are present. In contrast, variations in other CNVs have been implicated in a variety of disorders and diseases. Typically, these disease-causing CNVs encompass large areas of the genome and contain multiple genes. Therefore, the challenge is determining which genes cause the problems.

“Our idea was that there must be some genes within these regions with ‘Goldilocks’ properties: too much or too little duplication, and things don’t work properly,” said study co-author Aoife McLysaght. “The number of copies must be just right.”

The study found that CNVs associated with neurodevelopmental problems tended to display far less variation in gene copy number than CNVs whose variations are not associated with disorders. This pattern held true across different mammal species, including sheep, dogs, rabbits and gorillas. The researchers concluded that variations may evolve and persist in benign CNVs, but not in disease-linked CNVs, as the effects would be too damaging to be passed on by an individual to his/her children.

“Our work demonstrates that our evolutionary history is useful for understanding human disease,”. Dr. McLysaght added. “These metrics also allow us to home in on a short list of genes as candidates for the diseases in question — some of which are seriously debilitating. Isolating specific genes that are linked to these disorders will increase our understanding of how and why they develop, lead to better diagnostics, and potentially help to develop therapies further down the line.”

Do you work in this area of research? Check out available reagents for studying human development and neurobiology.