Treatment of burns with fish skin 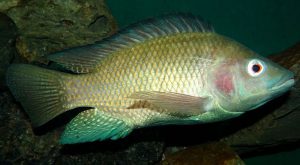 Treatment of severe burns is a critical care issue, especially in developing countries. In the United States, donated human or pig skin is generally used to graft on the injured patient. However, some countries do not have access to the biobanks and animal models necessary for treatment of burn victims. In Brazil, doctors are testing use of the skin of tilapia, a popular farmed fish, as a treatment for burns.

The World Health Organization estimates approximately 265,000 deaths per year due to severe burns, mostly in low and middle income countries. According to a recent review article in Critical Care, specialized facilities focus on stabilizing the patient, preventing infection and optimizing functional recovery. Nearly half a million people in the United States require treatment for severe burns every year.

Burns of the superficial skin layers are classified as first-degree burns. These red burns, sunburns for example, are usually painful, lasting a few days. When the burn extends into the underlying skin layer, it’s classified as a second-degree burn. These are very painful, include blisters and may result in scarring. In a third-degree burn, the injury extends to all layers of the skin, resulting in stiffness in the area, but not much pain. A fourth-degree burn additionally involves injury to deeper tissues including bones and muscles. These severe burns are generally black and result in loss of the burned part of the body.

A leading cause of death for burn victims is infection; thus, washing, treating and covering the wound is critical. In Brazil, with the lack of biobanks able to provide human or pig skin, burns are washed, treated and covered in gauze bandages. These, however, need to be removed daily to retreat the area, a very painful process for the patient.

Researchers and doctors in Brazil first analyzed the fish skin and found that it contained high levels of collagen types 1 and 3, proteins important for scarring. Additionally, tilapia skin demonstrated a greater tension of resistance and had more moisture than human skin. Tilapia skin bandages are first treated with sterilizing agents, then irradiated to kill viruses. They are then packaged and refrigerated for use. For superficial second-degree burns, the fish skin is placed over the burned skin and left until the patient’s skin scars. Deep second-degree burns require the fish skin to be changed during the course of treatment but much less frequently than the standard bandage and cream approach. According to Dr. Edmar Maciel, who is leading the clinical trial in Fortazela, Brazil, “the tilapia treatment also cuts down healing time by up to several days and reduces the use of pain medication.”