The Important Role of a Huntington’s Disease Protein

A research study published in Cell Reports by a team at Duke University has uncovered a new function of the gene called huntingtin. A mutation in huntingtin underlines the neurodegenerative disorder known as Huntington’s Disease.

A New Look at Huntingtin 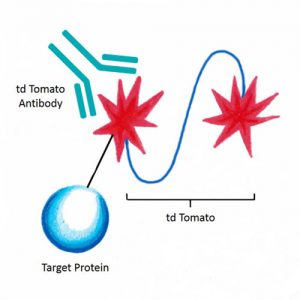 In this study, the researchers used a mouse model to study the striatum, a brain region involved in movement. They have discovered that neurons in the striatum require the huntingtin gene in order to regulate movement, maintain cell health and develop connections between cells.

Identifying huntingtin’s role in regulating cellular health and movement may open the door to a new avenue to studying Huntington’s Disease.

We were excited to see our anti-tdTomato listed as a primary antibody used for immunohistochemistry in the study. This antibody recognizes a red fluorescent protein used as a spectrally distinct companion or substitute for green fluorescent protein. It is specifically useful for nontoxic live cell imaging and reporter assays.

This inherited neurodegenerative disorder typically appears in mid-life, leading to impaired motor control, dementia and psychiatric symptoms. Scientists have been aware of the genetic roots of Huntington’s Disease for years; however, there are still no approved treatments to cure or slow the progression of the disease. 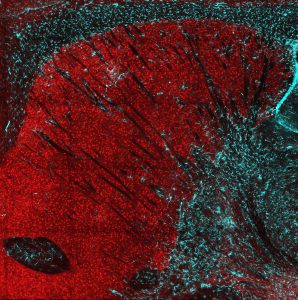 A cross-section of the striatum in a mouse brain. Showing a loss of huntingtin protein in red. Credit: Caley Burrus, Duke University.

Currently, clinical trials are looking at drugs designed to stop the mutant huntingtin. However, these drugs are also decreasing the amount of normal huntingtin protein. While much was known about huntingtin’s crucial role in cell function, little was known about its specific role in the striatum.

With the huntingtin gene deleted, the neurons began to die as the mice aged, a similar pattern to what is seen in Huntington’s Disease. Further, these mice showed an impaired ability to control movement even before the neurons themselves started to die. This result indicates that cell death itself might not be the sole cause of Huntington’s Disease symptoms.

“We believe changes at the neuronal and synapse level happening before cell death are contributing to the progression of the disease,” said PhD candidate Caley Burrus at the conclusion of the experiment. The team will continue their research by looking at the precise role that huntingtin plays in synapse development. This has the potential to lead to specific drugs designed to target these deficits.

Do you work in this field of research? If so, you may be interested in viewing our other reagents that can be used for neurodegenerative disease research. Some of the reagents include:

Further, if you were curious about our anti-tdTomato antibody used in the study, we also offer a variety of similar antibodies, including: