An HIV drug may reduce the impact of age-related disorders

Research led by scientists at Brown University now shows that an HIV drug may be able to significantly reduce age-related inflammation and other signs of aging in mice. The collaborative findings — which also included work by researchers from New York University, the University of Rochester, Université de Montréal, the University of Virginia School of Medicine, and Leiden University Medical Centre – were published in the journal Nature on February 6.

At Kerafast, we were excited to see our DNA-RNA Hybrid [S9.6] Antibody used in the research. The antibody displays high specificity and affinity for DNA-RNA hybrids, and was made available by the Stephen H. Leppla lab at the National Institute of Allergy and Infectious Diseases/NIH. 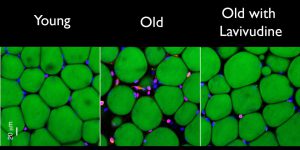 The HIV drug, lamivudine, works by blocking retrotransposon activity in old cells. Retrotransposons, common in human DNA, are sequences able to replicate and move within the genome.

The researchers were able to demonstrate that the L1 class of retrotransposons can escape from cellular control and start to replicate in both senescent human cells and old mice. They also discovered that this retrotransposon replication is detected by an antiviral immune response called the interferon response, which triggers inflammation in nearby cells. The response is of clinical significance, as age-related inflammation is an important component of age-associated disorders.

“This holds promise for treating age-associated disorders including Alzheimer’s,” said senior author John Sedivy in a press release. “And not just Alzheimer’s but many other diseases: Type 2 diabetes, Parkinson’s, macular degeneration, arthritis, all of these different things. That’s our goal.”

Testing and the Need for Further Research

In the study, the researchers tested six different HIV reverse transcriptase inhibitors to see if it was possible to block L1 activity and interferon response. Lamivudine was the most promising because of its effectiveness and limited side effects.

When the researchers gave 26-month-old mice (about equivalent to 75-year-old humans) lamivudine for as little as two weeks, there was a reduced interferon response and inflammation.

“If we treat with lamivudine, we make a tangible dent in the interferon response and inflammation,” Sedivy added. “But it doesn’t quite go back down to normal. We can fix part of the problem, but we don’t actually understand the whole aging problem yet. The L1 reverse transcripts are at least an important part of this mess.”

Do you work in this area of research? Kerafast offers a variety of unique lab-made reagents for studying disorders such as HIV and Alzheimer’s disease, including the DNA/RNA hybrid antibody used in this study and an interferon regulatory factor antibody from the Icahn School of Medicine at Mount Sinai.