Scientists from the La Jolla Institute of Immunology (LJI) have discovered a way to lessen the effects of T cell exhaustion and make CAR T cell therapies more effective, publishing their results in Nature.

We were pleased to see our MC-38 cell line, derived from murine colon adenocarcinoma cells, utilized in the research. The MC-38 cell line has been made available from the laboratories of James W. Hodge and Jeffrey Schlom with the National Cancer Institute/NIH. 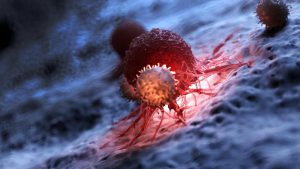 CAR T cell therapy – in which a patient’s own T cells are engineered to better fight cancer – has proven effective in treating blood cancers. However, it has been less successful in treating solid tumors due to a phenomenon called T cell exhaustion, in which the T cells lose their efficacy.

In a 2017 study, the LJI scientists looked at T cells in a mouse model of melanoma and found that two families of transcription factors, NFAT and Nr4a, contributed to this exhaustion effect. In the new study, they found that deleting Nr4a proteins from CAR T cells in mice led to smaller tumors and prolonged survival rates.

“There are a lot of steps between our experiments and the clinic, but every new bit of information we discover adds to our knowledge base and may contribute to improving cancer immunotherapies,” said Joyce Chen, the first author of the most recent study.

Chen and her colleagues altered T cells to act as CAR T cells with an ability to attack tumors, and injected them into mice with cancer. Mice in the experimental group were modified to have members of the Nr4a family deleted in their CAR T cells, while mice in the control group maintained their Nr4a family members.

Most of the mice that received the Nr4a-deleted CAR T cells survived, and their tumors regressed or stayed small over the course of the experiment. In contrast, almost all of the mice that received normal CAR T cells with the naturally occurring Nr4a transcription factors died by day 35 as a direct result of their tumors. The experiment therefore confirmed that Nr4a transcription factors help regulate T cell exhaustion, offering researchers a new target for designing better cancer therapies.

Do you work in this area of research? Kerafast has various unique lab-made reagents for researchers exploring cancer, including the MC-38 cell line used in this study, and materials such as: