An Institute for Research in Biomedicine (IRB Barcelona) and Vrije Universiteit Brussel (VUB) study describes camelid nanobodies with the capacity to block the activity of EGF (Epidermal Growth Factor), a protein that is abnormally regulated in cancer cells.

Nanobodies are an exciting area of research with the potential to help in the generation of new cancer therapeutics. Monoclonal antibodies are relatively large at 150 kDa, with two heavy chains and two light chains folded into constant and variable domains. In contrast, nanobodies are much smaller, consisting of a single variable domain and weighing in at only 15 kDa. They offer high stability, high solubility and strong in vivo tissue penetration, enabling research and tumor targeting that traditional antibodies cannot support.

Nanobodies are naturally produced by camelids, but scientists have begun making and using them for a variety of applications. For more on nanobodies, check out recent articles in Science and Frontiers in Immunology. 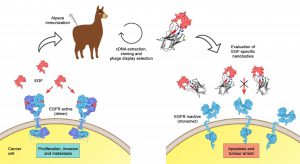 In the new study, published in the scientific journal Angewandte Chemie, the researchers identified a family of nanobodies effective against EGF, a therapeutic target in cancer.

To do so, IRB Barcelona produced the EGF protein and VUB administered it to alpacas, whose immune response generated a group of nanobodies. The research team then selected those with the best potential to inhibit EGF due to their high affinity and selectivity toward the protein. The team characterized the nanobodies’ interactions in cells in vitro and in human cancer cells using a range of biophysical techniques.

“In spite of advances in treatments against the EGR receptor (EGFR) in patients, their efficacy decreases over time because patients develop resistance,” said co-authors Monica Varese and Salvador Guardiola in a press release. “By taking advantage of an emerging biotech tool, nanobodies, we have been able to synthesize the first inhibitors with high affinity for EGF.”

The authors hope these nanobodies could be useful for patients who develop resistance to the EGFR inhibitors currently on the market. Up next, they plan to analyze the pharmacological effect of these new nanobodies in cell and animal models of cancer.

If you work in this area of research, you might be interested in our selection of unique lab-made cancer research reagents, including those for studying EGFR: