Antibiotics have been effectively utilized for decades in the treatment against infectious agents. However, antibiotic use has been known to have detrimental effects, including the development of antibiotic-resistant bacteria and alterations to the microbiota. The microbiota is a community of bacteria that colonize the body and can influence metabolism, physiology, nutrition and immune function. An ever-growing body of research indicates that the microbiota plays a critical role in regulating host homeostasis, and changes to the bacterial diversity of the microbiota may lead to increased susceptibility to disease. 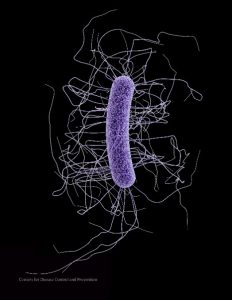 Clostridium difficile is a bacterium that colonizes the intestine and can result in diarrhea and life-threatening colitis. Worldwide, C. difficile is the leading cause of hospital-acquired infectious diarrhea and represents a significant threat to public health. C. difficile exists as spores that require specific bile acids to germinate and become growing bacteria. In the healthy intestine, C. difficile germination is prevented by the gut microbiota, but infection is common after prolonged antibiotic treatment. The treatment for C. difficile infection is further antibiotic treatment, but the negative impact of antibiotics on the gut microbiota and the emergence of antibiotic-resistant strains have necessitated the development of new treatment strategies.

Researchers at North Carolina State University sought to study 2-aminoimidazole (2-AI) molecules as an alternative treatment for intestinal C. difficile infection. The study, led by Dr. Casey M. Theriot, examined the effects of 2-AI on three stages of the C. difficile life cycle as well as the effects on bacteria that make up the gut microbiota. Their findings were recently published in Frontiers in Microbiology.

2-AI molecules work by inhibiting the signaling pathways that allow bacteria to respond to the local environment and can prevent the development of antibiotic resistance. 2-AI molecules have been used to treat antibiotic-resistant bacteria, such as Pseudomonas aeruginosa and Staphylococcus aureus. Given this information and previous research, Theriot and colleagues believed 2-AI molecules would be effective against C. difficile by preventing toxin activity and sporulation. Four different types of C. difficile strains (epidemic, non-epidemic, current and genetically divergent) and eight strains of commensal bacteria found in the healthy gut were treated with eleven different 2-AI molecules. Four of the 2-AI molecules prevented toxin activity without affecting C. difficile or commensal bacterial growth. None of the compounds had an impact on spore numbers.

It is estimated that up to 50% of prescriptions for antibiotics are unnecessary or prescribed for inappropriate doses and duration. As antibiotics continue to be widely prescribed, strategies to prevent collateral damage from their use will be important to prevent the onset of additional diseases. In the case of C. difficile, strains of this bacteria are becoming increasingly resistant to antibiotic treatments. The use of 2-AI molecules that prevent toxin activity without negatively affecting the microbiota holds promise as a new treatment strategy to combat C. difficile infection and limit the spread of resistant bacteria.

If you conduct research on infectious diseases, check out our catalog of microbiology and immunology reagents provided to us by our many academic partner institutions.