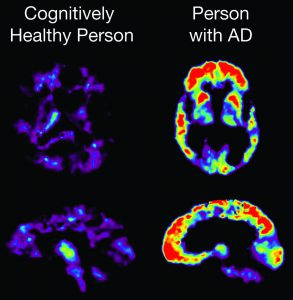 The brain of a cognitively healthy person (left) vs. the brain of a person with Alzheimer’s disease (right). Credit: NIH.

Until a discovery in 2015, it was believed that the lymphatic vessels surrounding the brain did not exist. Since then, researchers from the University of Virginia have made a connection between the aging vessels and the onset of Alzheimer’s disease. The researchers’ findings were published in the journal Nature.

Lymphatic Vessels and the Brain

In the new study, the researchers were able to improve the function of these vessels in aged mice by creating a compound that expands the vessels. After the compound was administered, the increased flow of waste and drainage from the expanded vessels directly improved the memory of the mice. Senior study author and chairman of UVA’s Department of Neuroscience Jonathan Kipnis said in a press release, “Here is the first time that we can actually enhance cognitive ability in an old mouse by targeting this lymphatic vasculature around the brain.”

The onset of Alzheimer’s disease has been connected to the buildup of amyloid plaques in the brain. The cause of these plaque buildups is not well understood; however, the discovery of the lymphatic vessels in the brain and the implications it has toward Alzheimer’s disease may shed light on the origin of the buildups. The researchers found that obstructing the vessel passageways worsened the accumulation of plaques, mimicking the aggregation of plaques seen in humans with the disease.

The researchers’ goal for these discoveries is to develop a drug that has a similar effect on the lymphatic vessels of the brain in humans as the compound had in mice. They believe that increasing the function of the lymphatic vessels may be able to push back the onset of Alzheimer’s beyond the human lifespan, delaying its effect to the point where treatment won’t be necessary.

This study comes from the University of Virginia, a Kerafast providing institution. If you work in this area of research, you may be interested in our Alzheimer’s related reagents, including: