The brief answer to this question is “We don’t know”. But the bigger question here is why should we bother to know? Cancer has been around for a very long time and humanity has come a long way investigating the characteristics and treatments for various kinds of cancer. In fact, in many cases, diagnosis of cancer is no longer a death sentence, just management of symptoms until the patient dies of natural causes. 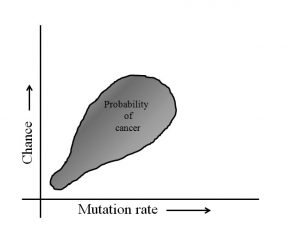 It has been known for quite a long time and experimentally proven that certain genetic mutations confer on cells an increased ability of division and proliferation – a phenomenon known as tumorigenesis. But it is not known whether these genetic aberrations present in a single cell would be sufficient to give rise to full-blown cancer of the tissue in question. Also, why are some parts of the body like the skin or large intestine more vulnerable to developing cancers than others, such as the brain?

In 2015, Cristian Tomasetti and Bert Vogelstein from Johns Hopkins University observed the nature of cancer cells from several different cancer types and concluded that it has more to do with the rate of stem cell divisions in a particular tissue than with the particular mutations themselves. Put it simply, tissues that have high turnover of cells get their population replenished by frequent cell divisions occurring in that tissue. During those divisions, one or a group of cells picks up genetic aberrations that increase chances of abnormal cell divisions and cancer. This conclusion seems perfectly reasonable as the DNA replication machinery within the biological system is not without errors and during every round of replication, some errors are made (and corrected too!), introducing mutations in the genome. Although most of these mutations could be harmless, a mutation in the wrong gene could have dangerous consequences. Tissues that have to undergo more cell divisions and hence replications of DNA are at a higher risk of accumulating such mutations.

Therefore, from this perspective, acquisition of these mutations seems to be absolutely a case of luck! This is counterintuitive to the belief that cancer-causing mutations are ‘inflicted’ by environmental factors like carcinogens (think of tobacco, sunlight, asbestos, etc.). Scientists also know that some of these harmful mutations can be inherited (think of BRCA1 in breast cancer). Tomasetti and Vogelstein wrote in Science, “……The majority is due to “bad luck”, that is, random mutations arising during DNA replication in normal, noncancerous stem cells.”

This puts down cancer to largely a case of chance rather than a defined process regulated by distinct factors, which renders it preventable in the later case. In fact, we do know that cancer risks are lowered by avoiding carcinogen exposure and lifestyle changes. But how do we reconcile these two ideas? Ed Yong of The Atlantic quotes Otis Brawley, chief medical officer for the American Cancer Society as telling CNN: “If you look at lung cancer, we know that 80% of U.S. cases are to do with smoking, but only 20% of smokers develop lung cancer. Chance is a huge factor.”

There have been a lot of counter-arguments to this “chance” idea; however, the focus of cancer research for the last few decades has been to identify factors that cause cancer in experimental models and try to prevent cancer by limiting human exposure to such factors. We need to rethink this approach now. Experimental biologists know that even to create an animal model of cancer, there exists a ‘chance’ factor that they always have to take into account statistically.

Dipanjan Basu, PhD, is a research instructor in the department of pathology at the University of Pittsburgh School of Medicine. His research focuses on pediatric rare congenital cancers. Learn more about his background here.

If you’re interested in writing for our blog, get in touch with us at info@kerafast.com. Articles submitted by July 31, 2018 will be entered in our summer blog contest for a chance to win a $500 Amazon gift card! Contest rules can be found here.