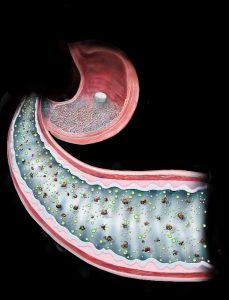 This is an image of ‘surgery in a pill’ in the intestine. Credit: Brigham and Women’s Hospital and Randal Mckenzie.

Despite the improvements made to weight loss surgeries that reverse diabetes and obesity, numerous patients continue to opt against it, finding it too invasive. This prompted Dr. Ali Tavakkoli of Brigham and Women’s Hospital to find a less invasive way to deliver the same benefits. The goal is to produce a pill that delivers a substance to coat the intestine temporarily and will be taken before meals to prevent a spike in blood sugar.

According to the American Diabetes Association, Type 2 diabetes is a condition in which your body becomes resistant to insulin and therefore cannot make enough insulin to keep your blood glucose at normal levels. Type 2 diabetes is the most common form of diabetes and is commonly treated with lifestyle changes, pills, or insulin.

Type 2 diabetes is a lifelong disease with many causes, from the patient’s genes to their weight. Obesity can cause insulin resistance, which ultimately leads to type 2 diabetes. One way to treat obesity that also improves the symptoms of type 2 diabetes is through gastric bypass surgery.

Gastric bypass surgery is a procedure in which the stomach is divided into a smaller and larger pouch, which are then connected by the small intestine. The volume of the stomach is reduced to the size of the smaller pouch, which results in weight loss and reduction of blood sugar levels. The American Society for Metabolic and Bariatric Surgery states, “Surgery improves type 2 diabetes in nearly 90 percent of patients”.

Surgery in a pill

A recent press release explains how the team of researchers from Brigham and Women’s Hospital came up with a substance called LuCl (Luminal Coating of the Intestine) to test on rats. The researchers started with an FDA-approved drug, called sucralfate, used to treat gastrointestinal ulcers. They modified it to create a new material that can coat the lining of the intestine, which can be engineered into a dry powder for delivery via an orally administrated pill.

The researchers found that the rats given LuCl before a meal displayed a lowered response to glucose, mimicking the effects of gastric bypass surgery on diabetes patients. The results were published in Nature Materials.

“What we’ve developed here is essentially, ‘surgery in a pill,'” said co-lead author Dr. Yuhan Lee. “We’ve used a bioengineering approach to formulate a pill that has good adhesion properties and can attach nicely to the gut in a preclinical model. And after a couple of hours, its effects dissipate.”

In the future, the researchers would like to prove that the LuCl can do more than replace gastric bypass surgery, such as deliver drugs and proteins directly into the gastrointestinal tract. The researchers will also be testing the short-term and long-term effects of LuCl on rats exhibiting diabetes and/or obesity.

If you are interested in this area of research, our catalog offers unique lab-made reagents for studying diabetes and obesity, including these related materials: