The number one cause of death in the world is heart failure, according to the World Health Organization. Causing 80% of the 17.7 million global cardiovascular disease deaths annually, heart failure caused by heart attack or stroke is a huge public health concern. A new study by researchers at the University of Washington has given optimism for a new potential treatment. 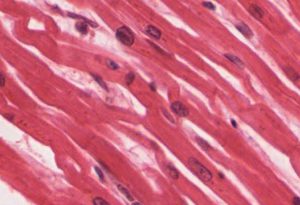 During a heart attack, regions of the heart muscle are damaged and scar tissue remains. The heart does not regenerate, so after a heart attack, the muscle does not work as efficiently and pumps less blood per beat. Not enough oxygen is distributed to the cells of the body, resulting in the heart failure symptoms of shortness of breath, weakness and fatigue. There is no way currently to repair the damaged heart muscles.

Publishing in the journal Nature Biotechnology, investigators utilized human embryonic stem cell-derived cardiomyocytes and injected the cells into the hearts of macaque monkeys who had experimentally-induced heart attacks. The researchers measured the ventricular ejection fractions of each heart’s left ventricle. This measurement demonstrates how much blood is pumped from the heart per beat, which is reduced after a heart attack.

Four weeks post injection of the stem cells, the researchers found that the ejection fraction of the treated animals had risen compared to the control group. They then performed magnetic resonance imaging (MRI) of the hearts and found that new muscle had grown where the scar tissue once was. After three months, the control monkey’s ejection fraction was declining, while the two treated monkeys continued to improve to almost normal levels.

When studying the hearts of the treated animals, the investigators found that the human embryonic stem cell-derived cardiomyocytes matured into heart cells and integrated with other healthy tissue, essentially surrounding the scar tissue. According to Dr. Charles Murry, who led the study, “Our findings show that human embryonic stem cell-derived cardiomyocytes can re-muscularize infarcts in macaque monkey hearts and, in doing so, reduce scar size and restore a significant amount of heart function.”

The potential for a new treatment

The end goal of the research is to develop a treatment that will prevent heart failure. Ideally, off-the-shelf frozen stem cells could be injected into patients shortly after a heart attack. These cells would then mature and colonize where the scar tissue once was. Heart cells have long life spans, so the treatment should only need to happen once.

Do you study cardiovascular disease in your laboratory or use non-human primates as a model? Kerafast offers a wide variety of reagents and cell lines for cardiac research, as well as a host of primate antibodies.