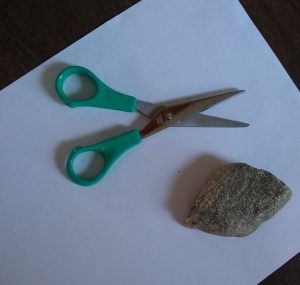 Both groups reported that a famous protein named p53 interferes with something called CRISPR. To understand what this means, think of the game of Rock, Paper, Scissors. The rock crushes the scissors, the scissors cut the paper, and the paper smothers the rock. Let’s say CRISPR is the scissors and p53 is the rock. CRISPR really is a molecular scissor; CRISPR is a DNA-cutting system which can cut a very specific point on the DNA, precisely wherever a scientist needs to cut. It’s being used not only in research but has started being used clinically to treat diseases caused by DNA mutations. Of course, many investors have put a lot of money into companies doing research on CRISPR.

As I mentioned, p53 is a famous protein. It’s been studied for many years because it’s a tumor suppressor. Many cancer cells contain inactivating mutations of p53, which explains why those cancer cells go on living.

The new discovery that p53 interferes with CRISPR can be compared to a rock crushing the scissors. And if you are a scientist trying to use CRISPR for good purposes, such as repairing a mutation to cure a patient’s genetic disease, it’s pretty crushing to have something as important as p53 interfering with your work! If only you could inhibit p53 and get on with your CRISPR. But p53 is one protein you would try to inhibit only with great fear and trepidation; inhibit p53, and you may cause cancer.

If that’s not bad enough, the results published in Nature Medicine seem to suggest that a lot of the successes of CRISPR to date have probably occurred in p53-deficient cells. And p53-deficient cells are prone to cancer. So successfully doing CRISPR repairs on cells seems to be a way of guaranteeing that the repaired cells are the ones that are prone to becoming cancer—possibly making cancers stronger. This is where the stock market comes in, if we call stocks “paper”: the news about the scissors (CRISPR) cut the paper (the stocks’ value). The CRISPR news sent a lot of stock prices down because investors – most of them not scientists – got worried that CRISPR may cause cancer and may not be useful to cure diseases after all.

But as a scientist, I see great opportunity in this! CRISPR can be used to cut DNA at specific sites so that desired repairs may be made on the DNA. And it can be used at two or more DNA sites at once. So why not use CRISPR to repair the genes of interest (as scientists have been doing) AND repair p53 mutations all in one fell swoop?  It can certainly be done in theory. CRISPR can also be used to temporarily inhibit gene expression—so could be used to block p53 briefly while CRISPR-mediated repairs are going on. I predict that scientists will soon be able to do all this! Even more exciting cures may be discovered now that we have this knowledge.

But my rock-paper-scissors analogy is going to break down now: the stock market is not going to smother p53. (Sigh with relief!)

If you’re interested in writing for our blog, get in touch with us at info@kerafast.com. Articles submitted by July 31, 2018 will be entered in our summer blog contest for a chance to win a $500 Amazon gift card! Contest rules can be found here.