In 10% of pediatric T-cell leukemia patients, the BCL-2 protein is overproduced due to a defect in the ribosomes, where proteins for cells are synthesized. A BCL-2 inhibiting drug is currently being used to treat chronic lymphocytic leukemia, but researchers at KU Leuven in Belgium are conducting studies to apply the drug to T-cell leukemia as well. The researchers’ new study is published in Leukemia Journal. 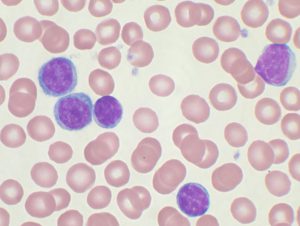 Blood cells of a patient with leukemia.

T cells are white blood cells that are very important to the immune system, helping the body decide how to respond to invaders. A normal T-cell can fight off potentially harmful cells that enter the body, but in the case of T-cell leukemia, the T-cells in the patient are malignant.

About 10% of pediatric patients with T-cell leukemia produce too much of a protein called BCL-2, a regulator protein controlling apoptosis, or programmed cell death. This is done by either inducing, or in this case, inhibiting cell death. When too much BCL-2 protein is produced, cancer cells become resistant to death and “escape” the effects of chemotherapy. The BCL-2 protein can even help the cells survive.

In the recent paper, the researchers outlined the effect of a specific ribosome defect on cancer promotion. Before their discovery, the impact of this mutation on T-cell leukemia was not clear. The research team, led by Professor Kim De Keersmaecker and her postdoc Dr. Kim R. Kampen, identified that the key to helping patients with this aggressive form of cancer is to suppress the BCL-2 protein.

There is already a drug with the desired BCL-2 suppressing effect on the market; however, it is for a different type of leukemia. The researchers’ studies have shown that the drug also helps mice with T-cell leukemia with this specific ribosome defect. It still needs to be tested on humans with this form of the disease.

“Patients with leukemia often get a drug cocktail, while our study only tested the BCL-2 inhibitor. That’s why our follow-up study will focus on a cocktail of this BCL-2 inhibitor and other drugs,” said De Keersmaecker in a press release. “For patients with the ribosome defect analyzed in our study, this avenue is definitely worth examining in greater detail.”

If you’re conducting research on the BCL-2 protein, check out related reagents from the laboratory of Dr. Chi Li at the University of Louisville. The lab has produced various plasmids and cell lines for studying the Bcl-2 protein family member Bcl-xL. You might also be interested in available materials for studying cancer and apoptosis.