An international team of scientists has developed a new experimental technique that uses X-ray lasers to better analyze the structure of amyloids, large filamentous biomolecules implicated in neurodegenerative diseases such as Alzheimer’s and Parkinson’s. Their method, recently outlined in the journal Nature Communications, opens up the ability to examine individual amyloid fibrils, the constituents of amyloid filaments.

Amyloids are long strands of proteins made up of thousands of identical subunits. They are thought to play a critical role in the development of Alzheimer’s disease; amyloid plaques are found in post-mortem brains of patients with the disease. The protein has other functions throughout the body as well. Endorphin hormones, for example, form amyloid fibrils in the pituitary gland.

Scientists are working to determine the spatial structure of amyloids as accurately as possible to elucidate how the protein fibrils form and function, as well as relate to neurodegenerative diseases. This has been a challenge with existing structural analysis techniques, however. Amyloids fibrils cannot be grown as crystals, which is the traditional way to obtain atomic-resolution structural studies using X-rays. In addition, individual amyloid fibrils are only a few nanometers thick, too small to produce a measurable signal when exposed to X-rays.

The typical approach, therefore, lines up millions of fibrils in parallel and bundles them so that their signals add up. The resulting diffraction patterns are therefore produced by the entire bundle, meaning scientists cannot obtain information about structural differences between the heterogeneous fibrils or observe individual fibril formation. 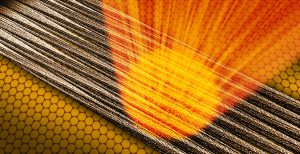 On the ultra-thin, extremely regular layer of graphene, the fibrils align themselves in parallel in large domains. The intense X-ray light from the X-ray free-electron laser LCLS at the SLAC National Accelerator Center enabled the researchers to gain partial information about the fibril structure from ensembles of just a few fibrils. Illustration: Greg Stewart/SLAC National Accelerator Laboratory.

In the new paper, the research team, led by Deutsches Elektronen-Synchrotron (DESY) scientists, developed a new experimental method to address these challenges using graphene, ultrathin carbon film. Instead of suspending the individual amyloids in a carrier fluid, the scientists placed them on graphene.

“This sample support has a double benefit,” said senior author Dr. Henry Chapman in a press release. “For one thing, graphene is just a single layer of atoms thin and in contrast to a carrier fluid hardy leaves a trace in the diffraction pattern. For another thing, its regular structure makes sure the protein fibrils all align in the same direction – at least in larger domains.”

The diffraction patterns of multiple fibrils overlap and reinforce one another, much like in a crystal, but there is no disruptive background scattering as in the case of a carrier fluid. The technique allows diffraction patterns to be obtained from fewer than 50 amyloid fibrils – and the scientists hope it can be further adopted to determine the structure of individual fibrils.

If you work in this area of research, check out our reagents for studying Alzheimer’s disease, developed and made available by academic investigators worldwide. Available materials include: