Bacterial toxins disable their host cells’ actin to cause infection

When a bacterial toxin infects a host, barriers are often in place as a preventative to protect the host’s cells. As little as a single copy of a toxin can kill a cell, and in general, the target of the toxin is a low abundant component of the cell. New research recently published in Current Biology sheds light on the mechanism of another set of toxins and how they target actin, an abundant protein, to destroy their hosts’ cells.

Actin is the scaffolding of the cell 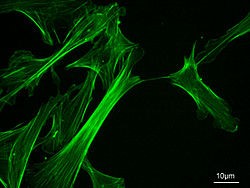 Actin proteins have multiple functions in cells, from supporting the cell’s structure and communication to playing roles in both the adaptive and innate immune systems. Actin composes a cytoskeleton crucial to cell survival. The new study, led by Ohio State University researchers Elena Kudryashova and Dmitri Kudryashov, focused on the toxin actin cross-linking domain (ACD), which is linked to cholera and other poisonings. Dr. Kudryashov’s laboratory set out to determine how a small amount of bacterial toxin could have such a sinister effect on the cell’s actin network.

Cholera toxin and other toxins of the bacteria genus Vibrio are found in saltwater or contaminated water and are usually acquired by consuming undercooked seafood. The toxins also kill marine life. Vibrio bacteria are gram-negative, flagellated, curved rods and include V. cholera, V. parahaemolyticus and V. vulnificus. V. vulnificus outbreaks are small but lethal and occurred after Hurricane Katrina, and in warm climates like Florida. Symptoms of Vibrio infection include gastroenteritis and septicemia.

The mechanism of ACD

Using a variety of techniques, including live cell single molecule speckle (SiMS) microscopy, total internal reflection fluorescence (TIRF) microscopy and actin polymerization assays, the researchers analyzed the activity of ACD infection in real-time. They found that ACD acts upon oligomeric G-actin binding proteins, “instructor proteins” which bind actin molecules. ACD binds to actin, basically forming clumps of actin, and the instructor proteins are unable to bind actin and do their job.  According to Dr. Kudryashov, “This is basically like crippling a nation by disabling all its instructors: political and military leadership, teachers and others. The population (actin) is there, but without proper instructions most transportation, imports and exports, border protection and other normal activities are halted or disorganized all at once.”

The importance of understanding bacterial toxin

We are currently in a situation where antibiotics are not as effective as they used to be. Bacteria have acquired resistance to many of the antibiotics used to fight infection. Thus, new methods to destroy bacteria are needed. As Dr. Kudryashova said, “When antibiotics worked effectively, we worried less about these processes in the cell, but today we must better understand how bacteria thrive in our bodies so that scientists might someday find alternative ways to fight them.”

Do you work in this area of research? Kerafast offers a wide variety of actin antibodies and other reagents for the study of this critical component of mammalian cells. You might also be interested in one of our materials for studying toxins, such as: