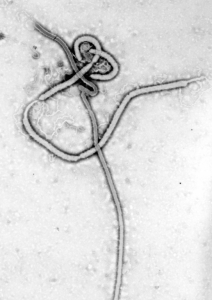 An electron micrograph of an Ebola viral particle. Credit: CDC/Dr. Frederick A. Murphy.

Cases of the Ebola virus have risen to levels high enough in the Democratic Republic of the Congo (DROC) that the World Health Organization (WHO) now considers it an outbreak.

Ebola was first identified in 1976 in Zaire (now Democratic Republic of the Congo) and was originally called Zaire Ebolavirus. It is now one of five strains of the virus and the most deadly. Ebola virus is a single-stranded RNA filovirus that causes Ebola virus disease (EVD), previously called Ebola hemorrhagic fever. According to the WHO, symptoms of EVD include sudden onset of fever, fatigue, muscle pain, headache and sore throat. This is followed by vomiting, diarrhea, rash, symptoms of impaired kidney and liver function, and in some cases, both internal and external bleeding.

The current outbreak originated in Bikora, a small rural community in northwest DROC. Concerns are rising as Ebola cases have been identified in Mbandaka, a large city of more than one million people near the Congo River. The disease is spread from animals to humans and then between humans by close contact with bodily fluids. Health workers are concerned that it could spread quickly downriver, as the Congo River is a main thoroughfare between Mbandaka and Kinshasha, the country’s large capital city.

This is the ninth outbreak in the DROC. Outbreaks of Ebola have occurred mostly on the African continent with the largest and most deadly from 2014-2016, which started in Guinea and spread to Sierra Leone and Liberia, resulting in a 40% fatality rate. EVD fatality rates have ranged from 25% to as high as 90% for some strains.

Although there is no cure for Ebola, there is an experimental vaccine, rVSV-ZEBOV from the pharmaceutical company Merck, which performed well in trials (as published in The Lancet) and is now being distributed to individuals at risk in Mbandaka. There are also experimental drugs being used to treat infected individuals. These include GS-5734, ZMapp and favipiravir.

Due to Ebola’s high mortality rate, it is considered a Risk Group 4 Pathogen by the WHO and requires biosafety level 4 containment. The US Centers for Disease Control and Prevention (CDC) consider Ebola a Category A bioterrorism agent.

Do you conduct research in the fields of virology or infectious disease? The Kerafast catalog has a wide variety of unique reagents for these applications, including: