Cancer is the leading cause of disease-related death in dogs, impacting our canine companions at the same rate as it affects humans. In both people and dogs, the estimated lifetime risk for cancer is approximately one in three. 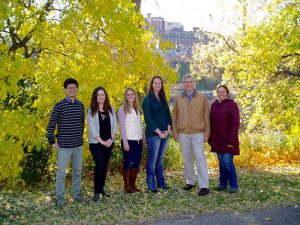 The Modiano Lab at the University of Minnesota

In Dr. Jaime Modiano’s lab in the College of Veterinary Medicine at the University of Minnesota, researchers are working to better understand how and why cancer occurs in both dogs and humans. They study how cancers in animals are similar to those in humans, applying what they learn from our companion pets to people and vice versa. They then translate that knowledge into the clinic, developing diagnostic tests and therapeutic tools for better cancer treatment and prevention.

From the lab to the clinic

Dogs can be either purebred or mixed breed, enabling the Modiano lab to use comparative genomic strategies to identify risk factors that contribute disproportionately to cancer risk and development. For example, they identified a predilection of certain breeds to develop lymphomas with a distinct cell of origin, documented that the same mutations are responsible for the development of certain cancers in both humans and dogs, and pinpointed unique molecular signatures associated with disease progression that can be used to personalize treatment plans.

The lab also studies lymphocyte regulation, explores new approaches for cancer immunotherapy, and develops diagnostic and therapeutic agents. They have developed patented methods to prognosticate tumors and predict responses to therapy, advancing to clinical trials in companion animals. For example, the Shine On Project, currently enrolling for Phase 3, seeks to determine if a test looking for specific cells in the blood can be used to detect hemangiosarcoma in its earliest stages, before a tumor has formed.

Visit the Modiano lab’s website to learn more about their research and clinical trials. 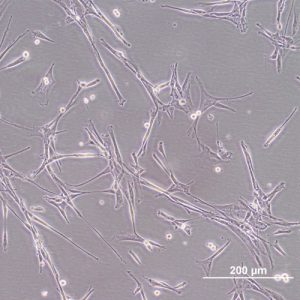 As part of their research, the Modiano lab has created numerous canine cancer cell lines, which grow in vitro and form tumors in immunodeficient mice. The cell lines have been derived from a variety of dog breeds and are models for different cancer types: melanoma, which occurs commonly in dogs with pigmented skin; osteosarcoma, the most common bone tumor found in dogs; and hemangiosarcoma, an incurable tumor of cells that line blood vessels. Hemangiosarcoma is far more common in dogs than any other species.

Other researchers have sought access to the Modiano lab’s cell lines to further their own studies into canine cancer, and in 2015, the University of Minnesota and Modiano lab partnered with Kerafast to streamline the distribution process. Now, researchers around the world can easily order and receive a cell line with a quick online Material Transfer Agreement.

You can learn more about the available cell lines here.

The University of Minnesota has an ongoing partnership with Kerafast to facilitate access to the unique research tools developed by its investigators. Dr. Modiano became the first UMN researcher to participate in the program, making available 11 canine cancer cell lines in 2015 and two new osteosarcoma cell lines in 2018, with more scheduled for addition later this year.

At the start of 2018, his cell lines had been ordered by scientists in 10 countries across 5 continents, and Kerafast had returned 10 consecutive quarterly royalty payments to UMN and the Modiano lab. Other UMN researchers interested in making reagents available can contact the university’s Office for Technology Commercialization.

Kerafast currently has established partnerships with 166 academic institutions worldwide, and any researcher who has developed a cell line, antibody, small molecule or other consumable reagent can make it available via our online catalog. Learn more about contributing your own reagents here.