The first cases of acquired immune deficiency syndrome (AIDS) in the United States were reported in June 1981. Since then, the global HIV/AIDS epidemic has continued to grow, and an estimated 36.7 million people were living with HIV infection in 2016. Despite decades of research and billions of dollars spent in funding research, neither a vaccine nor a cure exists.

Current strategies to combat the spread of HIV focus on prevention through behavioral and biomedical intervention. Those living with HIV/AIDS are treated by antiretroviral therapy (ART), a combination of medicines that inhibit the ability of the virus to replicate, reducing the amount of virus in the body and allowing the immune system to fight the infection. It is estimated that more than 20 million people living with HIV are treated with ART. The implementation of ART has led to a significant reduction in death rates and infections, but it requires daily use for an individual’s entire life. Other approaches to treating those living with HIV/AIDS include cell-based treatments based on the success of the “Berlin Patient”.

Timothy Ray Brown, known as the “Berlin Patient” was diagnosed with HIV in 1995 and treated with ART for 10 years. He then developed acute myeloid leukemia, another deadly disease, at which point his doctors decided to use radiation therapy and chemotherapy to ablate his immune system followed by repopulation with a donor’s immune cells. His doctors chose stem cells from a donor who was immune to HIV infection, a trait that is present in only 1 percent of Caucasian people. These individuals have a mutation in the gene that encodes CCR5, a receptor on the surface of T cells that is used by HIV to enter the cells. The treatment was successful, and Timothy Ray Brown was the first person to be cured of AIDS. 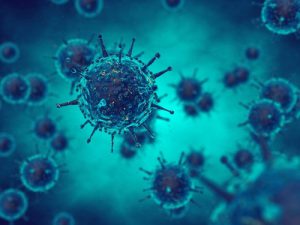 Steps to a safer cure for HIV

The use of allogeneic stem cells, those derived from a donor, can result in graft-versus-host disease (GVHD) where the donor immune cells recognize the recipient as foreign. This disease can result in the donor immune cells attacking the recipient’s organs, leading to potentially fatal complications. One third to one half of allogeneic transplant patients develop GVHD.

The researchers found that the transplanted CCR5-deleted HSPCs were able to traffic to and engraft in the lymph nodes, thymus, and tonsils, tissue sites of viral persistence. Additionally, T cells derived from the CCR5-deleted HSPCs were able to persist in vivo and appear to be resistant to infection. These findings provide evidence that autologous transplantation in infected and uninfected patients may be an effective cell-based therapy that can be combined with current treatments.

If you conduct research on HIV, check out our catalog of unique HIV reagents provided to us by our many academic partner institutions, including: