A tale of the cell cycle gone wrong

The cell cycle is an intricate and coordinated process that is vital to sustain life. In higher eukaryotes, the cell cycle produces daughter cells identical to the mother cell to renew tissues in internal organs like the liver, skin and hair. The cell has checkpoints along the way to halt the cycle if something goes wrong. These pauses in the process usually work, but occasionally the cell makes a mistake and moves on, keeping the errors. In these instances, the daughter cells could have mutations or translocations. Depending on the severity, the changes can result in disease, such as cancer. 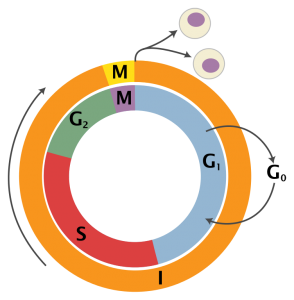 In eukaryotes, the cell cycle is split into two major phases: interphase and the mitotic (M) phase. Interphase is when the cell grows in size and copies its DNA, while mitosis is when the cell divides up its DNA and splits into two daughter cells. Most cells spend the majority of their lives in interphase, spending only a short time in mitosis. Interphase is split into three sub-stages: G1, S and G2. During G1, the first gap phase, the cell grows in size and ramps up protein synthesis to make more organelles. In S, or synthesis phase, the cell makes a copy of its DNA via semiconservative replication. This method of replication leaves each copy of the DNA with one old strand and one new strand. In the second gap phase, G2, the cell grows again and organizes itself to prepare for mitosis.

When the cell has grown enough to make two new identical daughter cells, it will enter in the mitotic (M) phase. During M phase, the cell moves its chromosomes, the carriers of DNA, to the formed mitotic spindle. The mitotic spindle is split up, with the chromosomes migrating to the edge of the cell. After the organelles and genetic material are in the proper locations, the cell will go through cytokinesis, splitting into two cells. If the cell is part of a rapidly dividing tissue, or part of a tumor, it will enter the cell cycle again. Otherwise, the cell goes into G0, a resting stage. In G0, the cell still performs its normal functions such as protein synthesis but will not divide again until receiving a signal to do so.

What can go wrong

Many of the errors that can occur during the cell cycle happen while the cell is duplicating its DNA, during S phase. Using one DNA strand as the template, the cell adds nucleotides to the other side to match – adenine with thymine, and cytosine with guanine. Occasionally, the cell will mismatch the nucleic acids, resulting in an error on one strand. Editing mechanisms are in place to proofread the DNA, but even sometimes these safety measures fail.

The built-in redundancy in the genetic code means that sometimes these mutations are harmless. Substituting one nucleic acid for the other can still result in the same amino acid and thus the same protein. However, sometimes it results in a completely different amino acid, which can be detrimental. If the mutation is “activating”, the cell might then continue to divide even though it doesn’t have any signals telling it to do so. This uncontrolled cell division is a hallmark of cancer.

Another major mistake during mitosis is chromosomal translocations, where one piece of a chromosome is moved to an incorrect location, such as onto a non-homologous chromosome. These occur usually because of poor repair following double-stranded breaks in the DNA. Instead of editing the break, the cell moves one piece of a chromosome to another. Perhaps the most well-known translocation is between chromosomes 9 and 21, called the Philadelphia chromosome, named for the city in which it was first described. The Philadelphia chromosome contains a gene fusion, BCR-ABL, that keeps the Abl protein, an enzyme involved in cell growth, signaling all the time, resulting in cancerous outgrowth of B-cells. This uncontrolled replication leads to leukemia and can spread to other regions of the body. In addition to cancer, chromosomal translocations can result in infertility and other genetic disorders.

The cell cycle is a delicate dance between efficient genetic replication and careful repair. Malfunctions in the editing machinery can result in mutations or chromosomal translocations. These events can be drivers of diseases, such as cancer.

Need a model cell line to study double-stranded breaks or chromosomal translocations? Kerafast provider, Dr. Tom Misteli of the National Cancer Institute, has several engineered cell lines to help in your studies! You can find all our available reagents for cell cycle research here.