The Centers for Disease Control and Prevention report that more than one third of the adult population within the United States is obese. Obesity-related diseases, such as type 2 diabetes and heart disease, are some of the leading causes of preventable death and result in billions of dollars in medical costs spent annually.

Obesity is a challenging health issue to address as there are genetic and behavioral factors involved. Many strategies for treating obesity focus on behavioral modification and awareness of eating habits, but a recent study published in PLOS Biology by Dr. Robin Dando at Cornell University sheds light on molecular factors that may play an important role in obesity. 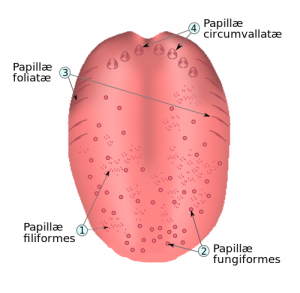 Taste buds are groupings of taste receptor cells located within the oral cavity. The majority of taste buds are localized to the tongue and allow for communication with sensory neurons that send information to the brain. Five tastes are generally recognized in humans: sweet, salt, sour, bitter and umami. Evolutionarily speaking, sensing different tastes allows for the identification of nutrient content in food and serves as a protective feature against potentially harmful foods.

Humans possess thousands of taste buds that are continually being renewed. In addition to providing information on nutrient content, taste can lead to a central reward response. Previous research has demonstrated a decline in the ability of obese individuals to taste and may explain the need for these individuals to consume more calories to activate the central reward response. This deterioration in taste can be ameliorated by weight loss, but little is known about the molecular factors involved in the loss of taste.

Dando and colleagues fed mice a high fat diet (HFD) and monitored weight and number of taste buds. Mice fed the HFD became obese and displayed a loss of taste buds when compared to littermates that were fed a healthy diet. Mice on the HFD also had reduced numbers of taste cell progenitor cells and stem cells, indicating an inability to renew taste cell populations.

Previous research has demonstrated that inflammation can lead to a reduction in the life-span of taste bud cells. The researchers examined the mouse taste tissues and found a significant increase in levels of TNFα, a potent pro-inflammatory cytokine, in the HFD mice. To further study the role of TNFα in loss of taste buds, mice lacking the ability to produce TNFα were fed the HFD or a healthy diet. The HFD led to weight gain, but those mice did not experience a loss in taste bud cells like their wild-type counterparts.

The findings by Dando and colleagues indicate an important role for inflammation in regulating taste bud loss and renewal. This understanding of changes in taste associated with obesity at the molecular level may represent a novel therapeutic target for future treatments of obesity.

If you work in this area of science, check out our catalog of unique reagents for obesity research provided to us by our many academic partner institutions, including: