Tomorrow’s life-saving antibiotics could be found in old compounds

Antibiotic resistance is one of today’s largest threats to global health, with at least two million people becoming infected with drug-resistant bacteria and at least 23,000 people dying as a result in the United States alone. To help mitigate the problem, researchers worldwide have been working to develop new antibiotics. 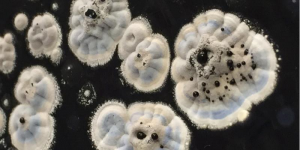 Now, scientists from the University of Leeds, one of our new providing institutions, are investigating whether previously discarded chemical compounds could be developed into new antibiotics for the fight against drug-resistant infections. In the mid-20th century, only a small proportion of chemical compounds with antibacterial properties were selected for therapeutic development. By applying today’s more advanced science and technology, the research team is determining whether any of the formerly abandoned compounds might hold therapeutic promise. Their work was recently published in the journal Scientific Reports.

“We’re showing the value of reviewing compounds previously put on the back of the shelf,” said senior author Dr. Alex O’Neill. “Amongst the 3,000 or so antibiotics discovered to date, only a handful have been brought into clinical use. There may be a wealth of compounds out there with untapped potential.”

The new research shows that a compound identified in the 1940s is a realistic target for developing a new antibiotic. The compound comes from a family called actinorhodins, which were initially identified as having weak antibiotic properties. Scientists did not look closely at the individual compounds within the actinorhodin family, however, to better understand their antibiotic nature.

The University of Leeds team looked specifically at one compound, called y-ACT, and found that it exhibited strong antibacterial activity against key Gram-positive pathogens, including Enterococcus and Staphylococcus aureus.

The promise of re-visiting older compounds was also shown in another recent University of Leeds study, published in the journal Biochemistry. This research examined a compound called pentyl pantothenamide, shown in the 1970s to stop E. coli growth. However, because the compound did not completely kill E. coli, it was never developed for clinical use.

“The results of our latest study open up the possibility of designing new drugs that use the same means to attack E. coli, but in a more effective way,” said lead author Dr. Michael Webb.

If you work in this area of science, check out our selection of bacteriology reagents to see if any could advance your research. You might also be interested in several previous blog posts on antibiotic research: