Researchers at Oregon State University have used X-ray crystallography to take the first atomic-level images of a peroxiredoxin. These images, recently published in the journal Structure, may possibly contribute to a new approach to antibiotics.”Peroxiredoxins are found in animals, plants, and bacteria, and are proteins that are crucial for cell survival,” explained lead author Arden Perkins. “The main function of peroxiredoxins is to eliminate hydrogen peroxide in cells by converting it to water,” he added. “This toxin is a byproduct of normal cell metabolism, and hydrogen peroxide has to be removed so it doesn’t damage the cell. If peroxiredoxin doesn’t do its job, cells will die.” 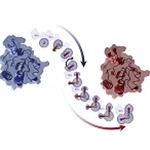 Though peroxiredoxin is required by all cells to help remove hydrogen peroxide, the protein can have a negative effect for humans when present inside bacteria. Peroxiredoxins within bacteria provide protection from the body’s immune cells, which in turn increases the potency of infection-causing bacterial cells.

The researchers demonstrated that when peroxiredoxin is restrained such that it loses mobility, function is lost as well, which can lead to cell death. Therefore, a molecule that selectively blocks the motions of peroxiredoxin only in bacterial cells could potentially lead to a novel way to kill those cells, while at the same time leaving normal cells undamaged.

The team also discovered unique regions on bacterial peroxiredoxins, unlike those found in humans, which could be targeted. Compounds could potentially target those regions and selectively shut down the protective function of peroxiredoxin only in bacteria. This could weaken or kill those bacteria cells, paving the way for new types of antibiotics.

“There’s a lot of potential for this to be foundational work, something we can build on to create a new class of antibiotics,” Perkins said. “The key concept is selectively restraining the motions of peroxiredoxins in some cells, inactivating its function and leading to the death of the cells you want to kill.”

This approach could have significant value, as bacteria resistance to current antibiotics is an increasing concern. According to the researchers, it also may work in tandem with existing antibiotics to create a more potent treatment. In addition, the concept may be useful against non-bacterial pathogens that cause serious diseases like malaria or African sleeping sickness, which have proven challenging to treat.

Do you work in this area of science? Check out our available bacteriology reagents to see if any could help accelerate your research. You also might be interested in other recent blog posts covering antibiotic research: