Winter is coming: Goldfish are the original home brewers

Ever wonder how fish survive beneath inches of ice during the winter? A new study published in Scientific Reports has shed some light on this mystery. The research was led by a team from the University of Oslo, an institution which became a Kerafast provider last year by making available the Rac/Cdc42 Isolation Kit. 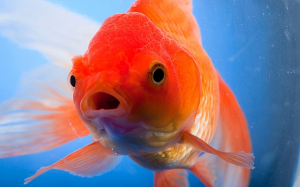 Most vertebrates will die within minutes if deprived of oxygen since they can no longer meet their systems’ energy demands. Crucian carp and goldfish have evolved a workaround by generating ethanol when stressed in no oxygen environments (anoxia) for up to 4-5 months. In other vertebrates, switching to anaerobic energy production is unsustainable – the buildup of lactic acid created through this energy process becomes dangerous over time. These fish have developed a special adaptation in which their skeletal muscles convert lactic acid into ethanol, which is then released into the surrounding water. Because they are able to achieve this conversion, they avoid the hazardous lactic acid buildup and can sustain anaerobic energy production for long periods of time.

The authors of this study attribute this advantage to a whole genome duplication event that occurred around eight million years ago in an ancestor common to the crucian carp and goldfish, giving rise to a tetraploid genome. These fish have four copies of every gene instead of the normal two. Because there are extra copies around, there is more wiggle room for mutations in one copy since a normal back-up is still there.

During the genome duplication, the species retained an extra set of genes, including those responsible for the breakdown of carbohydrates to the main energy source of a cell: adenosine triphosphate (ATP). One of those duplicated genes, pyruvate decarboxylase, is similar to the ethanol-producing enzymes found in brewer’s yeast. This special enzyme is activated in anoxia environments, allowing the fish to convert lactic acid into ethanol. The other copies of this gene are normal and retain the same function seen in other vertebrates in oxygen-rich conditions. This handy trick means that goldfish are a swimming brewery, producing enough alcohol to push them over the legal limit.

These findings demonstrate the incredible diversity across species and the evolutionary adaptations for survival in extreme conditions. Carp and goldfish are able to survive in conditions not tolerated by other species, thus reducing threats from competition and predation. This study also highlights the unlikely scientific utility of goldfish. Because these fish are constantly surrounded by ethanol, scientists can use them to study the effects of chronic alcohol exposure.

Interestingly, goldfish also have one of the most studied senses of vision in fish. They have four different channels for vision, which gives a similar effect to wearing sunglasses. They can detect polarized light, increasing the contrast between objects around them. This provides a survival advantage since it becomes easier to detect small prey. Researchers are hoping to use the learning from goldfish vision for robot or display technology.

The next time you see a goldfish, remember they are more than a cheap pet you reluctantly buy at a carnival. They are alcohol-producing survivalists with incredible vision!