The CETSA Technique for Drug Discovery

Traditionally, drug discovery groups have monitored target engagement in cells by looking at impacts in downstream signaling following treatment with a compound against a particular target. However, because proteins often participate in multiple signaling pathways, and compounds can bind to proteins aside from the target (called off-targets), looking only at downstream signaling can be convoluted and misleading. To help address these challenges, drug discovery researchers are leveraging a technique called Cellular Thermal Shift Assay (CETSA).

Thermal shift (TS), a technique first described by Semisotnov et al, measures the stability of a protein by exposing it to increasing temperatures. Modern TS assays use dyes such as Sypro orange, which bind to hydrophobic surfaces usually located on the inside of a folded protein. As temperature increases and the protein melts, more hydrophobic surfaces are exposed, and more dye can bind, releasing fluorescence. This fluorescent emission can be read by standard qPCR machines to determine the melting temperature (Tm) of a protein. 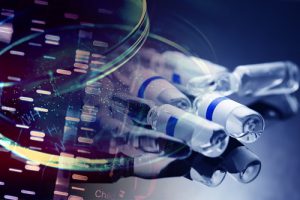 TS has become a routine biochemical assay in drug discovery as small molecules increase the stability of proteins, causing them to melt at higher temperatures. For example, if a protein has a Tm of 50C, but pre-incubating that protein with a small molecule increases the Tm to 57C, we now know that small molecule likely binds to the protein of interest. TS can be used as a screening method to identify molecules that bind to a target protein.

While TS is a useful biochemical assay, it cannot be used to evaluate molecule binding in cells. In 2013, Molina et al published on a new technique named Cellular Thermal Shift Assay (CETSA), which is used to examine target engagement by small molecules in cells. Applying the same principle as TS, this assay uses Western blot as a read-out. If the molecule binds the target of interest, the protein band on a Western blot will appear more intense than the protein alone since the protein is not as denatured when exposed to heat. This technique can also be used to investigate suspected off-targets.

Since the 2013 CETSA publication, scientists have been formulating more high-throughput CETSA assays. Western blot can be time consuming, is only semi-quantitative, and can be technically challenging if good antibodies are not available. In contrast, automated assays can be used to screen compounds rapidly once conditions are optimized by using 96 or 384 well plates. Using an orthogonal approach, such as looking at downstream signaling, together with plate-based CETSA could be a valuable data package to influence the direction of a drug discovery program.

Do you work in this area of research? Kerafast offers a variety of drug discovery research reagents, direct from the laboratories of academic investigators worldwide, including materials for studying diseases such as cancer, Alzheimer’s disease and diabetes.