New telomere findings with implications for human aging and cancer

An international team of researchers recently discovered a mechanism that regulates the identification and repair of critically short telomeres, the structures that protect chromosome ends from degradation. The new research, published in Cell, cites our DNA-RNA Hybrid [S9.6] Antibody and has implications for both human aging and cancer.

The role of telomeres 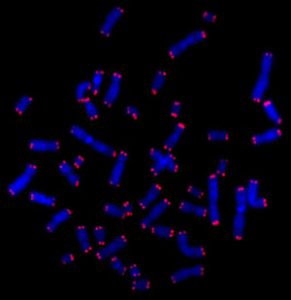 Telomeres are found at the end of each chromosome. Often compared to the plastic tips at the end of your shoelaces, telomeres are caps that help protect chromosomes and the genetic information they carry. As a cell ages, its chromosomes’ telomeres shorten; with each round of cell division, an average telomere loses 30-200 base pairs.

Once its telomeres get too short, a cell will undergo senescence – the process by which cells stop dividing – or apoptosis, cell death. This telomere shortening is linked to cellular aging, and much research has focused on how it impacts human aging and longevity. Other research has centered on the role of telomeres in cancer. Cancer cells divide quickly, which typically depletes telomere length, and have therefore adopted ways to maintain their telomeres and escape cell death.

In the new study, the researchers looked at telomeres that accidentally get cut too short, which must then be repaired to prevent the cell from undergoing premature senescence. The team – from the Institute of Molecular Biology in Germany, Sorbonne University in France and Tel Aviv University in Israel – explored how cells recognize and then promote the repair of these shortened telomeres.

Working in yeast, the researchers demonstrated that a non-coding RNA called TERRA is critical to cells’ telomere repair. TERRA is initially found at all telomeres, but at long telomeres, the proteins Rat1 and RNase H2 bind to the telomeres and remove the TERRA. In contrast, the two proteins are not present at short telomeres, allowing TERRA to bind to the DNA and accumulate as DNA-RNA hybrids (R-loops). The TERRA R-loops send signals to activate the DNA damage response, promoting the repair of short telomeres and allowing the cell to continue dividing.

During this research, the team used the DNA-RNA Hybrid [S9.6] Antibody, which is useful in the detection of R-loops due to its high specificity and affinity for DNA-RNA hybrids. The antibody, which does not cross-react with single- or double-stranded DNA, was developed and made available by the laboratory of Stephen H. Leppla, PhD, from the NIH’s National Institute of Allergy and Infectious Diseases.

Up next, the research team will be exploring the role of TERRA in human cells. In particular, they are planning to investigate its implications for human aging and cancer. “In the life of a cell, you have to find some sort of balance between cancer prevention and aging,” senior author Brian Luke of the Institute of Molecular Biology said in a press release. “Telomeres are at the nexus between the two, so understanding how they are maintained is really important.”

If you work in this area of research, check out our selection of unique lab-made reagents for studying DNA damage and repair. In addition to the DNA-RNA Hybrid [S9.6] Antibody, available materials include: