Mycobacterium tuberculosis (Mtb) is the causative agent of tuberculosis (TB), which remains one of the top ten causes of death worldwide, according to the World Health Organization (WHO). A recent study by investigators at Oregon State University identified mechanisms that the bacteria use to evade antibiotics and thus paves the way for new treatments for this dangerous disease. 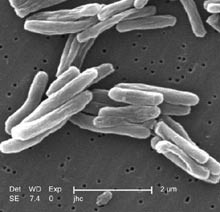 TB is extremely contagious, passed from person to person through the air via coughing, sneezing or spitting. Individuals with TB have symptoms such as coughing, chest pains, weakness, night sweats, fever and weight loss. According to the WHO, about one third of the global population has latent TB, where the individual is infected but shows no symptoms yet and is also not contagious. Approximately ten percent of individuals with latent TB will develop the disease. In 2015, 10.4 million people fell ill with TB and 1.8 million died, the vast majority in lower income countries.

In the 1850s, an estimated one in four people was killed by TB in North America and Europe. Overcrowded and poor living conditions contributed to the rapid spread and high mortality rates. In the United Kingdom, the popular treatment at the time was for patients to go to a sanitorium, a special hospital for rest, relaxation and good nutrition. Fresh air was also a component of the treatment regimen and patients’ beds were often placed in the outdoors.

Currently, treatment with the antibiotic rifampicin is the standard; however, many strains of TB are now resistant to rifampicin as well as other drugs. Often a cocktail of several antibiotics over the course of six months is required. Certainly, cost and compliance issues of multi-drug resistant TB (MDR-TB) are a burden to healthcare, especially in more developing countries where TB rates are highest.

BCG, or bacille Calmette-Guerin, is a vaccine for TB. It is recommended that children are vaccinated in countries with a high incidence of TB infection, but other countries, such as the United States, do not typically vaccinate due to the low incidence of the disease and the low efficacy of the vaccine to prevent disease in adults. Because so many drug-resistant tuberculosis strains are emerging, new efforts to develop more effective vaccines are underway.

Mtb is able to evade many antimicrobials for long periods of time and gain resistance. Researchers at Oregon State University analyzed enzymes in various metabolic pathways in both Mtb and Mycobacterium smegmatis, a non-pathogenic relative. Their work revealed that different enzymes were synthesized when the bacteria were treated with common antimicrobials. Corresponding author Dr. Luiz Bermudez and colleagues utilized examples from several classes of anti-TB drugs, including isoniazid, moxifloxacin, mefloquine and bedaquiline, in addition to rifampicin.

According to Dr. Bermudez, a physician and faculty member of OSU’s College of Veterinary Medicine, the researchers “looked at the enzymes carefully and realized the enzymes being synthesized by the bacteria were enzymes connecting several different metabolic pathways.” In other words, the bacteria were finding other ways to survive. The team inactivated genes coding several of these proteins in M. smegmatis and found that the bacteria were more susceptible to the drugs. According to Dr. Bermudez, “The identified proteins may provide powerful targets for development of synergistic drugs aimed to accelerate bacterial killing.”

Do you work in this area of research? The Kerafast catalog has a vast array of bacteriology reagents, including FITC-Trehalose from Oxford University. This compound selectively labels live mycobacteria in vitro and in vivo, allowing for downstream fluorescent imaging of M. tuberculosis in culture and in infected macrophages. Learn more here.