New research from University of California, Santa Cruz reveals a repair mechanism that allows cells to rescue very damaged chromosomes during the cell division process.  The study was published this June in the Journal of Cell Biology. 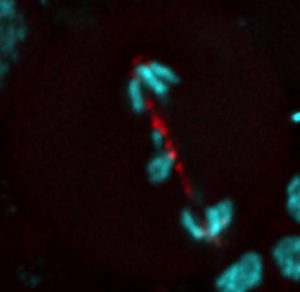 Cells use a variety of checkpoints and safeguards to maintain chromosome integrity during cell growth and division. If those measures fail, a cell may end up dividing with a loose chromosomal fragment drifting away from a broken chromosome. The lead author of the paper, Dr. William Sullivan, describes this as a “worst-case scenario for the cell” – potential consequences include cell death or cancerous growth.

The research team has identified a way for cells to repair this type of broken chromosome during cell division, allowing the chromosomes to function normally in the daughter cells. The process involves the creation of a DNA tether that keeps the broken fragment connected to the chromosome.

During division, a cell’s chromosomes are duplicated and each set is pulled to opposite sides of the cell. A new nuclear envelope grows around each set of chromosomes, and the cell separates into two daughter cells. However, the new research demonstrates that chromosome fragments don’t segregate with the other chromosomes. Rather, the fragments are pulled in by the DNA tether right as the new nuclear membrane is closing.

If this process fails and the fragment is left outside the new cell’s nucleus, the fragment forms a “micronucleus” with its own membrane. Micronuclei are susceptible to massive rearrangements of their genetic material, which can then be reincorporated into chromosomes during the next cell division. This event is often observed in cancer cells.

The study was conducted in the fruit fly Drosophila melanogaster, using fluorescent tags to visualize the chromosomes and other cellular components. The researchers had developed a strain of flies with broken chromosomes created by the expression of a DNA-cutting enzyme.

“We have flies in which 80 percent of the cells have double-strand breaks in the DNA, and the flies are fine,” Dr. Sullivan said in a press release. “The cell has this amazing mechanism, like a Hail Mary pass with time running out.”

The research team is continuing to explore this mechanism. Up next, they want to identify the genes responsible for creating the DNA tether, which could be promising therapeutic targets for the treatment of cancer.

Do you work in this area of research? You may be interested in a recent blog post describing new findings about a DNA repair complex. You may also want to check out one of our reagents for studying DNA damage and repair, including: