In a study published in Nature Methods this spring, a team of researchers developed a way to use standard light microscopes to obtain very high-resolution pictures of tissue samples. The new method, termed iterative expansion microscopy, enables imaging at a resolution of 25 nanometers. Because it doesn’t require any specialized equipment, the new technique is much cheaper and simpler than other imaging methods that provide similar resolution. 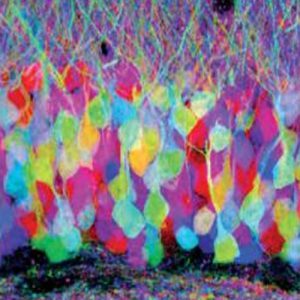 Brainbow antibodies, developed by Dr. Dawen Cai at the University of Michigan, were used in a new microscopy paper.

The study was conducted by researchers at MIT, Harvard University and University of Michigan. One of the authors, Dr. Dawen Cai of University of Michigan, is a Kerafast providing investigator whose Brainbow antibodies are available via our catalog. These polyclonal antibodies, suitable for fluorescent imaging applications, are capable of distinguishing between individual neurons in the brain. Several of Dr. Cai’s Brainbow antibodies, including anti-TagRFP, anti-mTFP and anti-GFP, were cited in the new Nature Methods paper.

Imaging with standard light microscopes is typically limited to a resolution of hundreds of nanometers. To achieve higher-resolution imaging with the same equipment, the research team first had to expand their tissue samples. To do so, they embedded the samples in a dense gel made of polyacrylate, an absorbent material also used in diapers. They labeled their cell proteins of interest with antibodies carrying DNA “barcodes”, which in turn were anchored to the gel.

Next, they broke down the proteins holding the tissue together, allowing the gel-specimen composite to expand as the gel swelled. The enlarged samples could then be labeled with fluorescent probes, which attached to the DNA barcodes, and visualized using a conventional light microscope.

Two years ago, the researchers used this approach to expand tissue volumes 100-fold, resulting in an image resolution of about 60 nanometers. In the new study, the team expanded the tissue a second time before imaging. Using this iterative expansion technique, they obtained images with a resolution of about 25 nanometers.

The researchers are now exploring the possibility of conducting a third round of expansion, which could in theory improve resolution to the five-nanometer mark.

In the Nature Methods paper, the research team used iterative expansion microscopy to visualize brain synapses, the junctions where messages are sent between nerve cells. At 25-nanometer resolution, the researchers could see the location of neurotransmitter receptors.

The new imaging approach could eventually be used to map complete neural circuits in the brain. Other potential applications include seeing the interactions between cancer cells and immune cells, as well as detecting pathogens without expensive equipment.

Do you work in this area of research? The Brainbow antibodies used in the study are available here. You might also be interested in several related reagents, including: