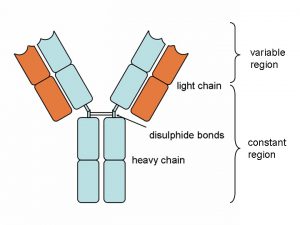 Antibodies are Y-shaped proteins produced naturally by the body’s immune system when it detects foreign substances. These proteins are commonly used in research to identify, locate and visualize intracellular and extracellular proteins. Antibodies are also being used for clinical applications, in particular as cancer therapeutics and in vaccine development. Here you’ll find a quick overview of antibodies, their applications and the terminology often used when discussing these important proteins.

The body produces antibodies in response to foreign substances, called antigens. Examples of antigens can be chemicals or microorganisms such as bacteria, viruses or parasites. An antibody consists of two identical heavy chains, as well as two identical light chains. The chains have a variable region (V), which binds to specific targets (called epitopes) on the antigen, as well as a constant region (C), which interacts with white blood cells and other molecules in the immune system.

The constant region also determines an antibody’s isostype, or class. Different isotypes have different functions and locations within the body. In mammals, there are five antibody isotypes:

Other antibody isotypes are present in non-mammals; for example, IgY is found in birds and reptiles. Example IgY antibodies in our catalog include the Chicken Polycystin Antibody from Johns Hopkins University and Chicken GFP Antibody from University of Michigan. 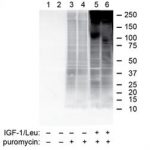 Antibodies are used for a variety of research applications to identify and locate proteins. Example applications include:

Antibodies are also used for clinical applications. For example, ELISA is used in pregnancy and HIV tests, as well as many other diagnostics. In addition, monoclonal antibodies are leveraged in certain forms of immunotherapy to target cells or proteins. Disease areas currently using monoclonal antibody therapy include multiple sclerosis, rheumatoid arthritis, Alzheimer’s disease and different cancers. In cancer, monoclonal antibodies can help make cancer cells more visible to the immune system, stop new blood vessels from forming, or block cell growth. The antibodies can also be engineered to deliver radiation or chemotherapy to cancer cells.

To conclude, antibodies are being used for a variety of research and clinical applications. The antibodies in the Kerafast catalog, made available by academic investigators worldwide, can be used to detect anything from the Zika virus to biotin to DNA-RNA hybrids. Our full list of available antibodies can be found here.