Malaria is a life-threatening disease caused by Plasmodium parasites. Anopheles mosquitos act as vectors for the disease, and Plasmodium parasites are transmitted through the bites of infected female mosquitos. Malaria transmission is most common in regions where Anopheles mosquitos are prevalent, such as in sub-Saharan Africa and South Asia. In 2015, 214 million worldwide cases of malaria were reported, and 438,000 deaths occurred. Uncomplicated malaria infection results in fever, headache, vomiting and flu-like illness that can be treated with artemisinin-based combination therapy (ACT). Severe malaria can develop if cases are not treated within 24 hours, and these individuals develop complications that often result in death. Treatment for severe malaria is harsh and can have its own deleterious side effects. Additionally, drug resistance to ACT is a growing problem in malaria-prone regions. Given the challenges facing the use of available malaria therapeutics, the need for new drugs to treat malaria is urgently needed. 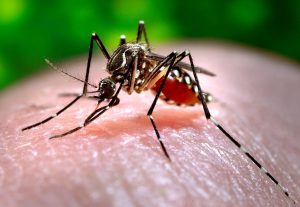 Researchers at Heidelberg University have developed a potential therapeutic for the treatment of malaria that has shown early success in animal models. The findings of Dr. Michael Lanzer and collaborators were recently published in Nature Communications. Lanzer and colleagues focused on creating an antimalarial drug with a novel molecular target and distinct chemical structure to prevent cross-resistance from occurring as well as creating a treatment that is safe to use in cases of severe malaria. The researchers started with amicarbalide, a drug that was previously used in veterinary medicine as an antiprotozoal drug. The use of this drug was discontinued due to poor parasite clearance rates and toxic side effects; however, Lanzer and colleagues were able to create two derivative compounds, SC81458 and SC83288, that displayed improved pharmacological and antiplasmodial properties.

The researchers tested the efficacy of the compounds in humanized NSG mice infected with Plasmodium parasites. NSG mice display functional human immune systems and are commonly used to evaluate compounds to treat human diseases. NSG mice treated with SC81458 and SC83288 displayed reduced parasitemia that fell below the level of detection 8 to 10 days post infection. In addition, all mice tolerated the treatment and did not show signs of distress. SC81458 and SC83288 were also shown to utilize a different mechanism to clear Plasmodium parasites than current malaria drugs and do not display any cross-resistance with the currently used drugs. These compounds are in the early stages of testing, but these results indicate promise for the two compounds to be safe and effective treatments for severe malaria.